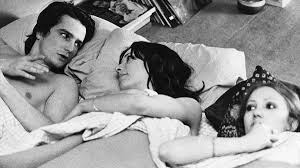 That was a tough one to get through.

In “The Mother and the Whore” (“Le Maman et la Putain”) we follow three people. Alexandre (Jean-Pierre Léaud) is a young man in Paris. He lives an idle life, doing nothing to earn an income, but spends his time picking up girls and telling anybody who cares to listen his view on things. Alexandre lives in a flat with Marie (Bernadette Lafont). Marie runs a small shop and while barely scraping through it is she who supports Alexandre. Veronika (Francoise Lebrun) is a nurse Alexandre picks up. She spends her spare time having sex with anybody, really, and getting drunk. Usually in combination.

It is obvious that the movie is a picture of and commentary to the post-68 culture of the early seventies. Alexandre is the useless and narcissistic intellectual who is wasting away his life considering his own belly button. His contribution to anything is zip. In his relationships it is him talking to the girls, not with the girls. He knows practically nothing about the women around him because his sole interest in them is as listeners. At the same time, he feels fully entitled to a bed to sleep in, a car to drive in, cigarettes, lots of alcohol and sex. What the girls see in him is truly a mystery. As such he is a harsh picture of the alternative lifestyle the 68 revolution produced.

The strange relationship between the three people is also an image of the hypocrisy of the free sex ideal. All of them recognize the open relationship ideal and all of them get hopelessly jealous when the others get involved with each other. They all seem to confuse sex and love and it is difficult to see that any of them get any pleasure or satisfaction from it, yet nobody puts the finger on the spot that free sex without commitment is just another empty waste of time. Sounds awfully prudish of me, but the casual, pointless way these people negotiate their relationships looks a lot more like a way to fight boredom and loneliness than anything meaningful.

This could be fun. I have watched a lot of movies that take a comedic spin on these post-68 characters, but that is not the angle of “The Mother and the Whore”. Instead, we are invited to the boredom and dreariness of these people’s lives. The movie is in black and white, it is 3½ hours long, with incredibly long scenes, often filled with Alexandre venting his thoughts on whatever topic comes to his mind. I feel the uselessness and boredom. I miss direction in the same way as the characters miss direction and I end up feeling somewhere between confusion, disgust and pity for these three people.

On the positive, it does take some skill to effectively communicate this to the audience and stay serious about it. The characters are acted very naturalistic and at the same time completely pathetic which is extraordinaire. But the result is also a movie which is very tough to get through, where I got bored and because I do not care for any of the characters, least of all the narcissistic Alexandre, I cannot invest myself with any of them. Then, do this for 3½ hours (deep breath…).

Some of the monologues do have some isolated value, though. There are small pieces of gold in them that ticked my interest (and thank you for that). They are just odd things to say in the context and therefore feels almost shoehorned into the movie, as if the director / scriptwriter wanted to express some ideas, but by letting Alexandre present them, they make him look smarter than he otherwise comes about.

I would only recommend “The Mother and the Whore” to those with a particular interest in post-68 counterculture and maybe make it an obligatory watch for youth considering experimenting with this scene. For myself, it is safe to already now predict that this will not be one of my favorite ‘73 movies.