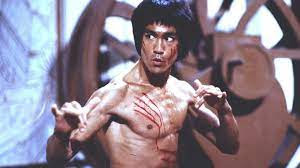 The one name that has, for as long as I have been around, been associated with Kung Fu is Bruce Lee. Most of the tropes about Kung Fu in movies are based on Bruce Lee. Bruce Lee is the martial arts actor above them all. And yet, in his too short life he only made a single movie for a Hollywood studio (and a pile of Hong Kong movies). That movie was “Enter the Dragon”.

I was quite certain I had been watching Bruce Lee movies before, but now I am not so certain and I a am positive this was first time for “Enter the Dragon”. What is a lot more likely is that I have seen it and him referenced in a ton of shows, to the extent that Bruce Lee is to me a familiar face.

“Enter the Dragon” was written for Bruce Lee as a vehicle, and he was himself very much involved in every aspect of it. The result is a polished-up Hong Kong movie, thin on story, but loaded with martial arts.

Lee (Bruce Lee) is sent from his Shaolin temple to infiltrate an island run by crime lord and Kung Fu renegade master Han (Shih Kien). Han runs a Kung Fu school on the island as a cover and has invited Kung Fu masters from around the world for a competition. Lee has a personal motive since Han’s goons caused the death of his sister. Other invites are Roper (John Saxon), a charming gambler, and Williams (Jim Kelly) with impressive microphone hair.

What happens next is not terribly important story wise. What matters is that this trio is kicking some serious ass. All three are accomplished fighters, but Bruce takes it further and single handedly best hundreds of useless henchmen. His fighting is almost a dance as he kicks and punches his way through the opposition.

That may also be the weakness of the movie. In every fight there is a superior and an inferior fighter and the better of the two makes the other look completely useless. It does not matter that he has just been an expert fighter. Against the new superior fighter, he will be completely useless. A good example is William, who has no problem against henchmen, but against Han he is even worse than the henchmen, if that was actually possible. For Bruce Lee this means that the first real challenge is also the last when he goes up against Han. But then he also gets comb to his hair…

In true Hong Kong style we get terrible dubbing and plot holes the size of a meteor crater. This would normally give the movie a tang of cheapness, but I found instead it lent authenticity to the movie. It felt like a Kung Fu movie because this is exactly what a Kung Fu movie is. Bruce Lee with his funny fighting sounds, the exaggerated sound effects, the mysterious sounding but pointless lines and larger than life villains.

This is Bruce Lee, and I had a great time watching it. HIIIAAAAAHHH—IHHH… HUH!

In 2008 my wife and I spent the Christmas week in Hong Kong and on the way up to the peak on Hong Kong island we saw this wax figure of Bruce Lee. He is big in Hong Kong!