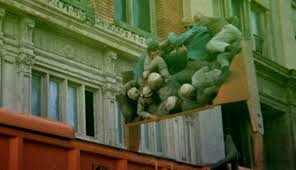 The second off-List movie of 1973 is “Soylent Green” and again we are in the science fiction genre. A few years ago I started a little sci-fi movie project with my wife. It is now defunct, but one of the movies I was looking forward to watch on that list was “Soylent Green”. It sounded interesting and I had never even heard about this movie.

“Soylent Green” is a dystopian detective story, 9 years before “Blade Runner”, set to take place in New York 2022. That is, next year! In this version of 2022 humankind has gone into a Malthusian death spiral. Wild population growth has used up all natural resources and destroyed the ecosystem until the only thing left is people. It is everybody for themselves and nothing works, except perhaps the police.

In this environment we meet Frank Thorn (Charlton Heston), a police detective, and his “Book” (researcher) Sol Roth (Edward G. Robinson). Thorn is investigating the murder of a rich fellow, Simonson, who lived in the fenced off exclusive part of town with his concubine, here called “furniture”, Shirl (Leigh Taylor-Young). Simonson was a board member of Soylent Industries who supply food for the mass of humanity in the form of nutrient wafers “Soylent Red” “Soylent Yellow” and “Soylent Green”. As Thorn gets deeper into this case he finds out things he probably wished he had never known.

There are a lot of similarities to “Blade Runner” here, but “Soylent Green” never does manage to hit the nerve “Blade Runner” touched. For one, the dystopian world, scary as it is, is not anywhere as convincing and thought through as “Blade Runners”. Although some of the things, the greenhouse effect, the reduced biodiversity, the depletion of resource, are no longer science fiction. “Blade Runner” had a melancholy darkness that held a lot of fascination, even appeal. In “Soylent Green” the world is just plain disgusting.

Another difference is that where Harrison Ford was a perfect cast, Charlton Heston was a terrible one. He is totally unconvincing and somehow strikes me more like a Douglas Fairbanks thrown into movie, except Fairbanks would have been a lot more fun. Somebody ought to have told him this is not “Ben Hur”.

But then on the other hand we get to see Edward G. Robinson in what turned out to be his last movie, and that was pure bliss. It is actually worth the admission just to enjoy the great Robinson. As a bonus we also get Joseph Cotten in a small, but important role as the murder victim, Simonson. Too little though to get much fun out of it.

When “Soylent Green” is best it is examining the horror of a hyper Malthusian age, taking that scenario into the most extreme and showing the degradation of people when there are too many of them and their lives are cheap. When it is worst, we get a not well enough thought through detective story with Charlton Heston as the knight in shining armor. That story has way too many holes and loose ends. We never even find out why Simonson dies and Thorn’s discovery in the end has only very thin ties to the murder case. Ugh.

There are things to enjoy in “Soylent Green” and I would not be surprised to see a remake at some point, but it was not a winner for me.

Oh, and by the way, if anybody offers you a piece of Soylent Green, just pass.