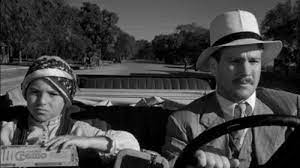 The third off-List movie of 1973 is Paper Moon. This is a movie I knew absolutely nothing about, but I read a very nice review on it at Flickers in Time (thanks, Bea) and got curious. It is indeed a delightful movie and one I am quite surprised was not included on the List. Well, it goes straight to my suggestions for what to add in the ideal revision.

Peter Bogdanovich took on the bestselling novel “Addie Pray” and reshaped it into something entirely Bogdanovich. It is the mid-thirties and at a funeral in the Kansas countryside Moze (Ryan O’Neal) drops in to say goodbye to the woman he apparently once knew. The locals, hoping he may be a relative, urge him to bring the dead woman’s daughter, Addie (Tatum O’Neal), to her aunt in Missouri. Moze is very reluctant, insisting that he is certainly not her father (though it is strongly hinted he may actually be), but Addie is a very clever girl and a quick learner and Addie has strong penchant for Moze profession, being a conman.

Before long Moze and Addie are running all sorts of scams on the local population, selling bibles to bereaved widows, fooling money out of cashiers and so on. Addie and Moze are quite a team.

At a carnival Moze gets infatuated with an exotic dancer with the wonderful name Trixie Delight (Madeline Kahn) and when they leave town Trixie and her maid, Imogene (P.J. Johnson), are added to the car. Addie is not amused and while she befriends Imogene, she contrives a complicated plan to get rid of Trixie.

“Paper Moon” goes a long way to look and feel like a movie from the mid-thirties. Black and white cinematography, a period soundtrack and a set on the Plains that looks decidedly yester-year. It is quite impressive. But what is an even bigger achievement is the tone it manages to keep. It is comedy, and a really fun comedy it is, but it never gets silly. This is depression era misery but it never gets maudlin. To call it bittersweet is probably too harsh, but it is like a Scandinavian comedy, tempered and underplayed and the result is heart warming and very enjoyable. This is a difficult balance, but Bogdanovich nailed it.

“Paper Moon” also features an amazing father and daughter duo. Ryan and Tatum O’Neal have a chemistry and confidence with each other that probably comes from their real life relationship. There is nothing uneven despite the age difference, Tatum is fully able to hold her own and at the same time Ryan holds nothing back. Tatum O’Neal was deservedly nominated for an Academy Award and was the youngest winner ever.

I had a great time watching “Paper Moon”. The adventures of Addie and Ryan are fun and outrageous, but what I most enjoyed was the ping pong bantering between them, the development from grumpiness, over respect to genuine love. As usual in road movies it is not the distance travelled on the road, but the one travelled in the heart.

Strongly recommended to everybody.

Talking of Scandinavian comedies, I really should get to see “Druk” as it won an Oscar last night.