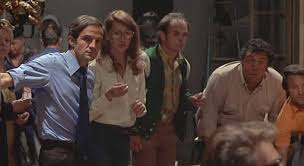 It is difficult to think of anything more meta than making a movie about making a movie and to have the director be acted by yourself, but that was exactly what Francois Truffaut did with “Day for Night” (“La Nuit Americaine”).

Like Bogdanovich and Scorsese, Truffaut was huge film geek and somewhere on the way I guess he thought that the process of making a movie would be a story good enough to be a movie. He had of course picked up a look of stories from the many movies he had already made and this he pieced together as “Day for Night”. Within the framework of making a movie called “Je Vous Présente Pamela” or just “Pamela”, Truffaut lets the crew act out small vignettes of stories. The movie they are making is not important, we never really understand what is going on in this movie. Instead, it is the process of making it that is in focus and the myriad small stories around it.

Truffaut himself as the director, Ferrand, is stressing about making the movie in very short time, compromising and improvising along the way to negotiate all the obstacles being thrown at him. He is no auteur, just a craftsman and it is the grinding out a movie that is the real art here. The actors all have their bigger and smaller issues. Alphonse (Jean-Pierre Léaud) is a man-child, only slightly more mature than in “The Mother and the Whore”. Alexandre (Jean-Pierre Aumont) is an actor past his prime but with a career in Hollywood, he presents himself as a big star. Séverine (Valentina Cortese), also past her prime, is drunk half the time and forgetting her lines. The big star of the movie, Julie (Jacqueline Bisset), is flown in from Hollywood to be the draw of “Pamela”, yet she is a nervous wreck, kept up by her doctor husband.

And then there is the crew, Odile (Nike Arrighi), from make-up, Joëlle (Nathalie Baye), the director’s assistant, Bertrand (Jean Champion), the producer and on and on.

Truffaut manages to keep the movie realistic while describing the set as madhouse full of overgrown children. It is a balance between a love letter to film making and a comedy, on the verge of becoming a farce, but stepping back from that.

The strength of “Day for Night” is that it is charming and many of the vignettes are funny as stand-alone images. The weakness is that it is a mess. There are so many things happening at the same time and many of the stories are both unrelated and going nowhere and that makes “Day for Night” lose focus. Ferrand and the movie are the only things that tie it together. Is that enough? At times it is. The movie set is a madhouse and you have to be crazy to go into this business, but somewhere in this mess there is also a great sympathy for those who go through with it anyway and live and breathe for making movies.

I was not entirely won over by “Day for Night”, it did feel too chaotic as a movie and too comedic as a documentary, but there are moments where I love it and that is enough.

The film industry loved it. They are suckers for movies about movies and “Day for Night” won the Academy award for best foreign language movie and was nominated in several other categories as well. For Truffaut himself this was a personal success and made him an enemy of Godard who hated the movie. That must be the biggest compliment of all.