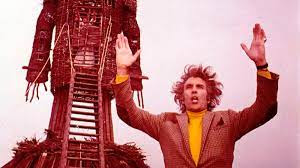 I am not an expert on the horror genre, not by a long shot, but in my poor experience (or taste) what makes a horror movie work is the sense of foreboding. The icky feeling that something is terribly off and that something bad is about to happen. It is that sense that makes me as a viewer scared of watching and prepare for anything, and that “anything” can in the imagination become truly horrific.

“The Wicker Man” is all about foreboding.

Police Sergeant Howie (Edward Woodward) arrives at the remote Scottish island Summerisle to investigate a reported missing child, Rowan Morrison, but his investigation run into early trouble. None of the islanders seem to recognize the girl and every step of the way Howie is told to get permission from the local nobleman, his lordship Lord Summerisle (Christopher Lee). Howie is forced to bully his demands through and find ample evidence that the girl does or did indeed exist. Howie is a devout Christian and is shocked to find an abundance of signs that the island has reverted to paganism and he becomes increasingly convinced that Rowan is held captive to become the May-day sacrifice to the islander’s gods.

The major part of the movie finds Howie going around finding all these weird hints, building up an anticipation of something dreadful. The islanders are the typical quaint type from so many other rural movies, think “Whiskey Galore”. They act and speak with that relaxed no-nonsense attitude that is so familiar, but then drop in a word or an act that is completely contrary to that nature. A good example is Mrs. Morrison treating her daughter’s sore throat by putting a toad in her mouth or the schoolteacher teaching very young children of phallic symbols. These may be small hints and elements, but it is exactly because they are only hints that they work so well.

What starts out as a criminal investigation gradually turn into a conflict between the Christian Sergeant Howie and the pagan and potentially satanic islanders. This sounds like a battle of good and evil, but it becomes strangely twisted. Howie represents a strict, dominant and restrictive faith while the islanders, despite their creepiness, seem free and liberated. They celebrate sex and fertility very openly, but is it free love or is it cultic and demonic abandon? So, as a viewer I start to become confused. Is the dogmatic Howie our hero or is it in fact the charming Lord Summerisle?

I will not reveal the ending here, that would be too much of a spoiler, but there is a very interesting twist that makes this movie something special when Howie encounters the Wicker Man.

In terms of style “The Wicker Man” is hard to place. It is obviously a horror movie, but the rusticity and the many songs makes it something of a folkloric musical. It would a appear as a strange combination and threw me at first. Then as the movie progresses it somehow ties well in with the plot. It juxtaposes the rural bliss with the ominous practices on the island. The tunes are rustic but the lyrics are lurid and bawdy in the extreme.

It is a slow movie to be frank and probably too slow for many horror fans, but it is all in the foreboding. Add to that the amazing voice of Christopher Lee and you have a winner. When Lee speaks to the public, he does it with that booming voice that makes me think of Saruman much later in his career and that gives me the shivers.

“The Wicker Man” is a recommendation from me. Horror without gore and jump scares, but with foreboding is spades.