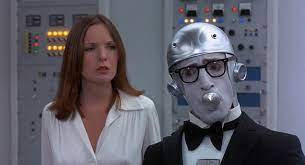 With “Sleeper” I have arrived at the first Woody Allen movie on the List. I have not checked but I got the feeling there are quite a few of his movies coming up. Woody Allen is one of those directors, like Roman Polanski, whose movies you seemingly cannot discuss without also discussing the person, so let me just get that off my chest right away. I do not really care what sort of weirdo a guy may be or whether or not he may or may not be guilty of something. It is the movie I am looking at, that is all I really know and all I can talk about.

With that out of the way, let me continue being general and confess that Woody Allen’s schtick never really worked for me. His little, neurotic New Yorker is missed on me and the movies of his I like the best are those without him acting or at least staying in the background. It is not a dislike, I am just sort of indifferent to his typical character.

This is a problem when watching “Sleeper” because this is very much about Allen doing his thing and a lot of the comedy is dependent on that.

In “Sleeper” Miles (Allen) is a musician and owner of a health food store in New York (of course), who in 1973 went to hospital for a simple procedure, got frozen down and revived 200 year later. The doctors have to keep him hidden because they want to use him for a covert operation against the dictatorship they live in and soon he is on the run in a world he does not understand. This is all played out as slapstick comedy a la Chaplin or Keaton, complete with ragtime music and sped-up chases. Miles is a clown and everything he touches is a mess. The police, however, is not much better.

One of the novelties of 2173 is the butler android. Miles has an early encounter with one of these and escaping in a butler robot supply van he disguises himself as a butler robot. In this function he starts working for Luna (Diane Keaton), a snobbish artist who is not terribly bright. As a butler, Miles is a disaster and Luna wants his head replaced. Hilarity ensues and soon Miles is on the run again, this time with Luna in tow.

Everything here aims for comedy and this follows two tracks, the physical slapstick comedy and the little, neurotic New Yorker comedy and it plays both hard. The first actually has its moments, but Allen is not Chaplin or Keaton, and it is in general played too hard. My son would probably find it more to his taste. The other line, well, if you like Allen’s schtick…

I do not mind silly comedies, I laugh myself silly to Naked Gun or Airplane!, but it does not work too well for me here. I am also losing tough with a story which is, I think, more interesting than Allen’s comedy. There is a lot of Tati here, the bafflement with technology and the alienation caused by technology and modernity. Tati just does it a lot better. This ties in with a criticism of conformity and government control, which is very early-seventies. Yet all I get from the movie is that Woody Allen wants to be Chaplin.

I am likely the wrong audience for this movie, and would not be surprised if I stand alone on this. It is interesting to see what Woody Allen did in his early years, but otherwise I will leave it to Allen fans to give their appraisal for “Sleeper”.