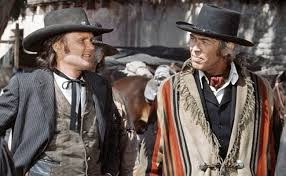 Pat Garrett and Billy the Kid

The backstory on the making of “Pat Garrett and Billy the Kid” is one ripe with controversy. Sam Peckinpah apparently managed to run afoul on everybody and their mother and the project sort of exploded. There is a theatrical version, largely disowned by everybody, a preview version, hailed as a masterpiece and special edition with a bit of both. My copy appears to be the special edition, but I am not too certain as the cover of my copy is in Polish.

Somehow, though, I guess it would not matter too much to me which version I had been watching. The general impression is likely to have been the same. Peckinpah was very nostalgic about the old West, but his vision is in my opinion a very depressing one. His is a dirty, disgusting land, populated by unsympathetic characters who drink too much, shoot too much and generally ride their own horse too much. I disliked every single character with a vengeance.

The story is a rehash of the old Pat Garrett and Billy the Kid story, only in this rendition, because this is the early seventies, Billy the Kid (Kris Kristofferson) becomes some sort of a Robin Hood character, standing up against big business and the corruption of the Law. It does not change that Billy is a reckless murderer who cares very little for other people, but generally does (and kills) anything he likes, simply because he can. In this way the story follows the same pattern as “Badlands” and countless other movies. The freedom of the criminal to enjoy himself and do whatever he likes as some sort of ideal. I have never really understood this device.

The Law represented by Pat Garrett (James Coburn) is just as unlikable. He is not just a tough copper, but a sell-out former gangster who is wearing a badge in return for security and representing the corrupt law as shaped by the criminal, financial interests. Pat used to be a friend of Billy, but now Billy has to die so Pat can get old in peace.

The setup is a duel between two bad guys and while they kill left and right before they finally meet, the showdown is completely anticlimactic.

I get the impression that in order to milk this story for the umptieth time they had to find some new angles and add layers, but that is all it really is, dressing on the cake. The story is just what it is and these layers only serve to slow down the story to a glacial pace. A good example is the weird inclusion of Bob Dylan into the movie. He made the score, which is all right, but for some reason he has to be in the movie as well. We see him a lot, like really a lot, but as a character with no name, no function and no influence on the progression of the story. He is just so much filler.

Technically I have no problem with this movie. The cinematography and the acting is as good as it gets. It is the sentiments behind it I do not get. If the objective is to describe a rotten place full of rotten people with rotten motives, it is doing a brilliant job. I am just happy I am not there.

Curiously, now I come to think of it, this movie must take place not too far from where “Breaking Bad” was set. That was a series I liked a lot even though it works on many of the same ideas. Strange that this worked well for me and this movie did not.

I am quite convinced there will be many fans of “Pat Garrett and Billy the Kid”, the themes are very popular, but I cannot honestly recommend a movie I did not like myself.