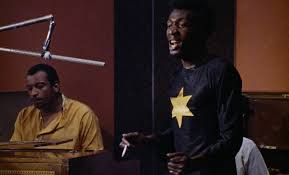 The Harder They Come

Yea mann, the first Jamaican movie, and not a bad entry, not at all.

“The Harder They Come” is not only the first Jamaican movie on the List, it was practically the first movie to come out of Jamaica and brought with it the reggae music to the rest of the world. As such it made quite a splash and the soundtrack is possibly even more famous than the movie. I knew a few of the songs up front, particularly “You can get it if you really want”, though I had no idea they were from this movie. The above song was used for years as the theme song for a larger Danish travel agency, so imagine my surprise when this was what met me upon inserting the DVD.

The story is about Ivanhoe Martin (Jimmy Cliff, the reggae icon), who is a dude just come into town (Kingston, presumably) from the countryside to try his luck. His only skill is to sing and that is not in high demand. He gets employed by a priest who eventually kicks him out for dallying with a girl in his care. Then he gets a chance to record a record (the title song “The Harder They Come”), but is paid off with a lousy 20$ by the producer. When he complains, he gets blacklisted.

Then Ivan tries his luck as a ganja courier and that seems to go well until he starts killing people. Hunted by the police he now becomes something of a hero among the poor and his record is suddenly a hit. This only lasts until heavily armed police forces catch up with him.

It is a movie that portrays the difficulty of getting anywhere when you are at the bottom in Jamaica. The “You can get it if you really want” song is sort of a mockery on the hopelessness of not being given a break and that crime seems like the only alternative to poverty. This part of the movie shows a different part of Jamaica than the paradisic beaches and holiday resorts that most people would have known at the time. It is rough and tough, but by presenting this honest picture it also hit a nerve with the locals who saw themselves in the movie.

In all this grime, the movie also presents a vibrant culture and music scene, an energy and resilience that lifts people, if not out of their misery, then at least making it bearable. This part is absolutely captivating and worth the admission all by itself. It is rumored that attending a screening of this movie is a party in itself with the viewers engaging in this culture. Something I really have to try.

The music is the true highlight of the movie. It is constantly there, and though many songs are repeated, it does not matter, the reggae grove is infectious and sits with you for a long time after watching the movie. I find myself humming the tunes to distraction and it makes me happy.

The downside is that for large chunks of the movie I had no idea what was happening and only a plot summary on Wikipedia gave me the outline, but that is a technical issue. The language of the movie is Jamaican patois and really thick at that. I do not understand much more that the “Yea mann…” Because of stupid Brexit custom rules I bought my copy from Amazon Germany and this copy only had German subtitles and this just made me really confused. I seriously have to find me a copy with English subtitles.

This is a movie you get for the soundtrack, but eventually the movie itself will win you over too. Highly recommended.