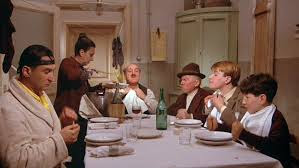 Frederico Fellini has been hit or miss for me. Most misses, though. With “Amarcord” he is getting a big hit.

There is no plot as such in “Amarcord” instead it is a series of vignettes throughout a year, from spring to spring, in the small town of Borgo San Giuliano at the Adriatic sea. This place is populated by a host of… somewhat eccentric people or maybe they are just being Italians. This is not a satire on them but more like a loving and probably slightly accentuated memory of a past life.

The most recurrent character is that of Titta (Bruno Zanin), a teenage boy. His family is dysfunctional in that particular Italian fashion where they both love each other dearly and constantly tries to tear each other’s heads off. Both Titta’s father Aurelio (Armando Brancia) and his mother, Miranda (Pupella Maggio) are equipped with very short fuses.

The school is pretty useless and the children seem to be spending a lot more energy on pranks than actual useful study. Religion is not much better. What the children are much more interested in is what exotic events go on at the fashionable Rimini Grand Hotel and especially any story involving Gradisca (Magali Noël), the strikingly red-haired hairdresser.

The town has its blind musician, the clowning vendor of anything, especially tall stories, a crazy prostitute, and a historian who serves as our guide and tells of the historic background of things, though he seems to be mostly interested in Roman era ruins.

The population of this village is very excitable. Any event whatsoever gets everybody into a frenzy, bonfire, car race or well, anything really. The entire village jump into boats and sail off to sea to watch a new and giant ship steam off to the high seas.

My personal favorite scene though is when Titta’s family picks up uncle Teo (Ciccio Ingrassia) from the insane asylum to take him on a picnic to a farm, presumably belonging to the family. On this outing Teo climbs a tall tree where he sits for hours, shouting “I want a woman!” (“Voglio una donna!”). Armed with stones he throws them at anybody who climbs the tree to get him down. Finally, orderlies from the asylum comes to take him down. The dwarf nun, climbing the ladder, may be the donna he was crying for.

All these vignettes are charming and full of life and feeling. Certainly, these people are half nuts, but that is what makes them so likable. Even the visiting Fascists cannot suppress this anarchy, though they are described as not a little nutty and juvenile themselves. There is a feeling that this places is caught in a time pocket where the outside world, not matter how hard it tries, cannot fundamentally change anything and yet there is a nostalgic aura as if, alas, this place is now only a memory.

I think this is the thing that ties all of this together as a whole and makes it work. There is a sense of paradise lost here. A dysfunctional paradise, perhaps, but precious nonetheless, and that is the feeling I am left with at the close of the movie.

It feels as if Fellini for a change forgot many of his normal notions of narcissism and extravagance and instead employed his considerable talents to just making a portrait of this community and thank you for that. A movie like “Satyricon” could not be more different from “Amarcord” and I would say he redeemed himself with this one.

By far the best Fellini movie in the catalogue. Strongly recommended.