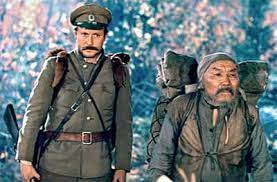 The first movie of 1974 is Kurosawa’s Russian movie, “Dersu Uzala”.

Vladimir Arsenyev was a Russian explorer of the Far East of some fame in Russia. During his exploration of the Primorsky Kraj region (the region of Vladivostok, east of the Amur river) at the beginning of the century, he befriended an indigenous hunter named Dersu Uzala about whom he later wrote a book. This book fascinated Kurosawa already back in 39 and he got as far as early shooting before he gave up the project. The wilderness of the site itself play so large a part in this story that without access to Primorsky Kraj the movie would not work. Fast forward to 1972 where Russian Mosfilm reached out to Kurosawa and offered him a chance to direct a Russian production of Arsenyev’s book on location. Kurosawa when into this 100%.

This may seem like an odd movie for a director famous for his samurai movies, but Kurosawa was a lot more than that and to me “Dersu Uzala” has quite a lot in common with “Ikiru”, a brilliant early movie of his.

Arsenyev (Yury Solomin) is a captain in the Russian army in the first decade of the twentieth century, who is tasked with mapping the wild hills of the Primorsky Kraj. He brings with him a small term of soldiers, but otherwise it is just him and the enormous wilderness. Out there he meets the indigenous hunter Dersu Uzala (Maxim Muzuk). Dersu is a bit eccentric but also intimately familiar with the wilderness and while the soldiers initially see him as a bit of a clown, he soon earns their respect. Through Dersu Uzala they learn to see the real wilderness, the animals, the spirits, the resources and the few odd inhabitants. He becomes Arsenyev’s guide, not just for his mission but for the land itself.

When Dersu Uzala also saves them from certain death on a number of occasions a bond for life is made between the Captain and the Hunter.

This is a very slow movie and fairly long. Kurosawa tries to make us experience and feel this wilderness and through an Ozu like meditative pace he is quite successful. There is not so much a progressive plot as an evolving friendship and understanding of this world, so much that it at times feel like a lyrical documentary and that is meant as a positive.

Dersu Uzala is like a Rousseau noble savage juxtapositioned with the civilization Arsenyev represents. The wilderness free of guile. But it is also a savage wilderness where only the strong and those willing to learn survive and Dersu Uzala is a survivor. When Dersu gets old and his eyesight poor, Arsenyev invites him to stay with his family in town, but Dersu withers in the town. For a free spirit, civilization is a prison, full of rules and don’ts. Dersu Uzala is as wild as the wilderness.

I liked “Dersu Uzala” a lot. The meditative pace is perfect for it, and we become observers together with Arsenyev. Maxim Muzuk is very convincing although he is Tuvian and therefore from an entirely different part of Sibiria.  This is a love letter to this region and to a wilder past. We see one of those magnificent Sibirian Tigers and it is symbolic that this is the spirit of the wilderness and there are now so few left.

“Dersu Uzala” won the Academy Award for Best Foreign Language Film in 1976 and it is a recommendation from me.

Note: Do yourself a favor a watch it in Russian. The English dubbing is… well… not as good.