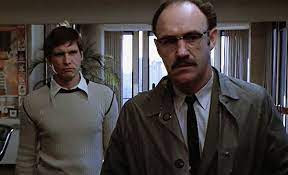 1974 was a good year for Francis Ford Coppola. Not only did he win with “The Goodfather part II”, he was also nominated twice personally for “The Conversation”. In the shadow of “The Godfather I+II” it is easy to miss “The Conversation”. Personally, I had not even heard about it before watching it. It is a much smaller movie in scope, more a character study than anything else, but perhaps because of this narrow scope it reaches a depth shared by few other movies.

Harry Caul (Gene Hackman) is a surveillance expert. This is the high-tech version of the private eye. Corporate espionage, extramarital affairs or political shenanigans, Caul is the expert. He is a technical wizard, builds much of his equipment himself, and knows all the tricks in the business. Harry Caul is also a very lonely man. All this surveillance has made him the ultimate voyeur and because he can glean all the secrets from other people, he is convinced he himself is just as exposed to others. He never tells anybody any personal details and are nervous around anybody who asks him questions. We see how this makes women around him give up on him. Nobody wants to be kept at arm’s length.

This voyeurism also becomes a bit of an obsession in relation to his work. Professionally, what he observes is not his business, he simply delivers the tapes or photos to his clients against payment, but somewhere he is losing that professionalism and gets engaged in his material. Harry suspects, becomes convinced even, that the couple he is asked to keep under surveillance are at risk of getting murdered. His only input are those recordings and photos he has, but hearing them again and again enables him to piece together a picture.

The problem is that, like the blind man touching only part of an elephant, the image he gets is wrong. A murder is in planning, but he got the wrong victim, and he is powerless to do anything to prevent it. At the same time he learns that all the care he takes to shield himself is futile. He is as prone to surveillance and tricks as his marks and as powerless to prevent it. His innermost secrets, those he guards most zealously, are there for the taking.

For a man like Harry Caul this is complete destruction. He is a failure. This is also a warning about the dangers of surveillance.

For a movie as downbeat as this, “The Conversation” is very engaging. We are truly getting under the skin of Harry Caul, and we feel we understand his sorry and very lonely existence. He is paranoid, but even his paranoia offers him no protection and no answers. I know this is a movie that should make me depressed, but Coppola and Hackman are just too good to let me dismiss the movie.

Beside a brilliant performance by Gene Hackman, “The Conversation” also sports an amazing jazz soundtrack. This is the kind of music that gets under my skin and I can easily think of an autumn afternoon where I would feel like listening to nothing but this.

As a little bonus we also get a young Harrison Ford as Caul’s client’s spooky assistant. A small but important role, feeding Caul’s paranoia.

“The Conversation was nominated for the Academy Award for Best Picture, Best Original Screenplay (by Coppola) and Best Sound. All three highly deserved nominations. It is early into my 74 movies to say, but I could see Hackman getting a nomination too.