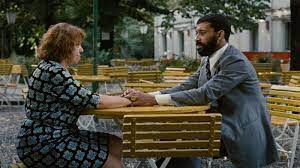 The next installment from the hands of Rainer Werner Fassbinder is “Ali: Fear Eats the Soul” (“Angst essen Seele auf”). This time Fassbinder takes on the theme of racism.

One rainy night, Emmi (Brigitte Mira), a 60 or so year old widow, enters a bar to seek shelter. This is a bar frequented by guestworkers and she is clearly a rare sight in the bar. The patrons want to have fun with her and suggest Ali (El Hedi ben Salem) to dance with her. Ali, however, is a gentleman and he helps her home and as it rains, Emmi asks him inside until the rain clears. Emmi and Ali fall for each other.

This is controversial. Ali is 20 years younger than Emmi, but, a lot worse, he is also Moroccan, one of the many guestworkers that had started to arrive in Germany. Emmi and Ali do not seem to care but everybody else does. A large chunk of the movie is the reaction of their surroundings. The gossiping Hausfrau in her apartment block, her narrowminded colleagues at work, the deeply racist grocery storekeeper across the street, even the staff at Ali’s bar. The most hurtful reactions come from Emmi’s grown children who essentially cut her off for marrying Ali. Not that they cared much about her to begin with.

“Ali: Fear Eats the Soul” is filmed in a strange, stilted manner. The actors are frequently just standing still, looking with the camera just lingering. The dialogue is often short and clipped and delivered as if the actor is just reading from a script. It is an odd impression, somewhere between theatrical and amateurish. Eventually I realized it is a stylistic choice. It removes it a little bit from reality and perhaps allows it to caricature some of the characters and reactions.

It is a very focused story, on the racism met by this mixed couple. We learn very little about them. The only reason for them falling for each other seems to be that they are both lonely and colorblind (as well as age-blind). The stylism allows this singular focus. This also means it is a very easy movie to read: It is simply an exposé of all the racism and prejudice people who are different are faced with. Make them gay or in other ways different from mainstream and it would be the same story.

I think Fassbinder had a good time making this movie. It is an open provocation of mainstream Germany, exposing both smaller and large scale racism and also the often ridiculous opinions and reactions. All these people get to look incredibly small and stupid. The best scene is when Emmi is presenting Ali to her grown children. The look, drawn out, of their stunned disbelief, shock and embarrassment is so hilariously funny that I just could not stop laughing. Fassbinder made these children 10 years again.

The movie takes place in Munich. Fassbinder had some relation to Munich, and the movie allegedly takes place some month after the Munich Olympic Games tragedy, helping to explain some of the animosity towards foreigners, but it also feels like an apt choice. My wife has some relation to Munich and used to live there so I have visited Munich frequently. Let us just say that it is not surprising that Hitler started his career in Munich.

I would not go so far as to say “Ali: Fear Eats the Soul” is a great film, but it is interesting enough and of course just as relevant today as it was in 74. If you are in a Fassbinder mood, this would be a good pick.

Anyway, I am off to Germany tomorrow, not Munich this time, but Berlin (much nicer place) for a little vacation. If weather holds, we are going to visit the Babelsberg studios in Potsdam. Cannot wait…