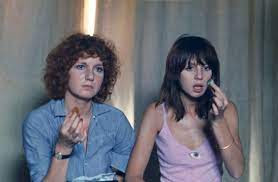 The Book writes that if you do not master French, you will not fully appreciate this movie. This is likely true, and I suspect this can be extended to not even understand this movie. I know, I know, I have been here before and yes, I seem to be one those plebeian viewers who need the movie to make sense on the immediate level to appreciate it. It is clearly a failing in me, so my views are strictly for myself and not a general verdict on the movie.

Or, to be more precise, every time I thought I understood what it is going on, something happened to convince me that I do not understand it after all.

Julie (Dominique Labourier) sits in a park reading a book on magic spells. She sees another woman, Celine (Juliet Berto) rush by and drop something. Julie picks it up and runs after Celine to return it, but she keeps running away, dropping more things. After a long run through Paris, they meet up in a café and soon after they are best friends (?). They start sharing each other’s life, literally, and they start visiting a strange house. Coming out from the house they are confused and do not remember anything, but there is a candy in their mouth and using this candy they can relive what appears to happen in the house as if it is a movie.

The story in the house is a loop around a triangle drama where a child ends up dead, but they only see bits and pieces, so they have to return to get more candy. Julie also finds out this is a house she visited a lot when she was younger, maybe even as a child.

Eventually, Julie and Celine cook up a magic brew so they can enter the story and save the girl.

There are elements that are naturalistic, like the Paris setting and the bohemian lives of the women and then there is the fantastic, Alice in Wonderland, element of entering a magic fantasy world. The problem for me is that neither are very consistent. In both, the things they say or do or events they are subjected to make very little sense, as if it all take place on a planet where cause and effect are messed up. When I started to settle on the idea that they have found an entrance to a fantasy world where they can change events I actually did get invested in the story, almost understanding it, only to get thrown off again when clearly something else was going on.

So, what is actually happening here? Forget about the apparent story. The real story is something about fantasy worlds, about loops, inner-lives and some meta-themes around being a viewer and active participant at the same time. From what perspective are we watching a story? Can we take on the role of somebody else? Who is the viewer anyway? Is all this actually the imagination of a cat?

Heady stuff, and I am not at all certain any of this is even remotely correct.

What I do know is that “Celine and Julie Go Boating” clocks in at over 3 hours and that I had to stop it several time because I was zoning out. You have to be really into this stuff to stay focused throughout its running time and I cannot say that I was. Half the time I had no idea what was going on. My mastery of French is clearly insufficient.