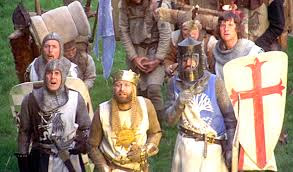 It is the Christmas vacation and what is better than to sit down with the family and watch classical movies. Lo and behold, the next movie on the List is “Monty Python and the Holy Grail” and what movie could be better for the purpose. My son and I had an excellent time rewatching this household classic.

Usually, going through the List, if I am not watching a movie for the first time, it is at least decades since I watched them last. Not so with “Monty Python and the Holy Grail”. I have completely lost count of the number of times I have watched this one and even my eleven-year-old son has by now watched it several times. The jokes are still great although I know them by heart, and it is great to see the impact they have on a child who is less jaded than me. “You must find the tallest tree in the forest and cut it down… with a herring!” and he completely cracks up.

I understand that Monty Python can be polarizing. Either you love their anarchistic British humor, or you don’t. Their style is a complete lack of respect for even the concept of a joke, which means that any situation can literally go anywhere. Combine this with a completely straight-faced delivery of even the most absurd joke and you have something that is either insanely funny or completely stupid.

Personally, I love it.

Of the three Monty Python movies, “Monty Python and the Holy Grail” is my personal favorite. It may not be as coherent as “Life of Brian”, but it is entirely true to the anarchy that is the heart-blood of Monty Python.

The frame story is the legend of King Arthur and his quest for the holy grail. King Arthur (Graham Chapman) is gathering knights for his Round Table, but before they can get to Camelot (it is a silly place…) they receive the quest to find the holy grail.

Except in Monty Python’s rendition horses are replaced by a servant banging coconuts, the knights are parodies, the medieval setting is an idiotic and dirty squalor. Each episode is a setup for a joke. Some fit into the narrative, some a tangential and some are so completely fourth-wall breaking that if it was not hilariously funny it would cause a breakdown of the movie. Something that ultimately has a direct influence on the ending, which the troupe called “a big let-down … a great anti-climax”.

It is challenging to string a concept of sketches into a coherent whole and this was the first time Monty Python went from their sketch shows into directing a feature length film. There are places where you can see that they are feeling their way, but in a sense, this is also a strength of the movie. It is as if nobody told them how to make a movie, so they just did it their own way. Terry Gilliam did move on to become a very accomplished director.

That leaves just one question: What is the airspeed velocity of a swallow?