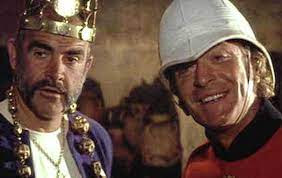 Off-List: The Man Who Would Be King

The third off-List movie for 1975 is “The Man Who Would Be King”. This is one of those movies that look pretty amazing on paper. A Rudyard Kipling story, directed by John Huston and starring Sean Connery, Michael Caine and Christopher Plummer. Yet I never heard of this movie until I started screening 1975 for potential off-List movies. This could either be a giant flop or a hidden gem.

The answer, at least in my poor opinion, is somewhere in between. This is a big and impressive production. There is format here, quality in the production and an adventure like few others. But there is also something very old-fashioned and outdated about the story itself and the sentiments behind. “Gunga Din”, another Kipling story, was outdated in 1939 and “The Man Who Would Be King”, more than 30 years later follow almost the same colonialist track. There are some excuses, but is it enough?

Rudyard Kipling himself (Christopher Plummer) is found by a haggard and slightly unhinged Peachy Carnehan (Michael Caine) who relates to him a strange tale, starting with a chance encounter with Kipling years earlier in Victorian era India. Peachy and Daniel Dravot (Sean Connery) are two British adventurers. As sergeants in the British colonial forces they have been everywhere and seen everything in India and they are now effectually conmen roaming the land, exploiting what they are able to exploit. They latest scheme is to venture into Kafiristan in present day Afghanistan loaded with guns to set themselves up as kings among the barbarians.

This starts out well enough. The locals appear to never having seen firearms before so when they take down a raiding party they are impressed with them. Peachy and Daniel are tasked with training an army and conquering the neighbors. When they win, they prevent the traditional bloodbath and want the conquered to join ranks and instead the tribe leader is cut down, making Peachy and Daniel de facto leaders. In one of these early battles Daniel is struck by an arrow. It pierces his bandolier instead of his chest, but to the locals it looks like he is ignoring a killing shot and they see him as a god, the long-awaited son of Sikander, Alexander the Great of antiquity. Being king and god, the two adventurers have gained all they hope for, only to find out what happens when people realize they have been duped.

Connery and Caine are more British than British. Their colonial arrogance is immense and so is their enterprising cheek. This is both amusing and fascinating, but also jarring. No doubt they were excellent picks for the roles. As representatives of western supremacy, they are both shamelessly arrogant and foolishly ignorant. I would not be surprised if this sort of people actually went around doing these things in the nineteenth century and I would be even less surprised to learn of it happening in this day and age. The potential problem here is that we are supposed to like and root for them and in the process see the locals as backward fools. And they are likeable and funny and bold and is this right? I cannot help thinking that as entertaining and impressive this movie is, its colonialist premise simply does not work anymore and I wonder if it did in 1975. Sure, their arrogance lead to their fall and there may be a message there and I suppose that carries a meaning too, but is that the point or just an excuse?

Maybe I am thinking to much meaning into this. Maybe this should simply be seen as an adventure, as a boys fantasy, of wealth and fame and danger in the exotic wilds of the world. And Peachy and Daniel were not the last to underestimate the Afghans and flee out of the country.

It is worth watching the movie, the production value alone makes it worthwhile, but I also understand why it has practically disappeared.