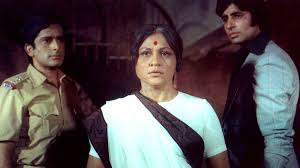 “Deewaar” was maybe the most difficult movie to watch on the List so far. I ordered it from Amazon, but the sub-provider did not handle customs, a persistent problem since Brexit, so beside the 3€ custom charge I had to pay a 20€ handling charge from the carrier. When it finally arrived it turned out that what I had bought was the 2004 version of Deewar and not the 1975 version. That version is very difficult to buy, however, it turned out that it is on Youtube, which makes it public domain. Only, that version does not come with subtitles and Hindi is, well, not my thing. Hunting high and low I did manage to find a downloadable version. Without subtitles, but at least such a version can be paired with a subtitle file. It took me five attempts to find a proper subtitle file that was only 3 minutes delayed compared to the picture. I just had to remember what I had seen some minutes before to make sense of the subtitles.  With 50 minutes left, the video changed to a second file and for this there was no subtitle file. As a result, I had to guess at what went on for the last third of the movie.

My experience with Hindi movies is largely limited to the movies on the List and I have very little basis for evaluating whether or not this is a good Hindi movie and thus worth the hardships I went through to watch this.

A union leader is leading a strike against a corporation but is forced to capitulate when the boss kidnaps his wife and two sons. He is disgraced and run away, while his family is ostracized and flees to the city. Here the mother (Nirupa Roy) must work hard to raise the children Vijay and Ravi.

Fast forward 15-20 years and the children are grown up. Vijay (Amitabh Bachchan) becomes a dock worker who in the course of his work comes into contact with the underworld. When he beats up gangsters working for a kingpin called Samant, he gets the attention of another kingpin called Daavar. Soon Vijay is a trusted henchman of Daavar and making a ton of money. Meanwhile, Ravi (Shashi Kapoor) completes his studies and become a policeman.

From here it is pretty obvious that this will end in a clash and that everybody will feel devastated with the outcome.

This looks like a good production with action scenes and reasonable acting. The songs are limited and there is only a singe dance sequence. I think I might have enjoyed watching this if it had not been so straining to work out what was happening. A lot of the sentiments are communicated hard, there is very little subtlety here and that is actually quite helpful, but it also gives the movie a crude appearance. It is a difference movie culture and that is about as far as that is.

What I liked was how cool Vijay was portrayed. With his hairstyle and open shirts with large collars he looks and acts like an Indian Elvis look-alike with a penchant for over-the-top coolness. I would not say it was outright comical, but it did have an unintentional effect in that direction.

I doubt Hindi movies will ever be my thing, but it is always interesting to watch something else. This one may be a good representative, but I would like it to be a little more accessible for me to actually enjoy it.