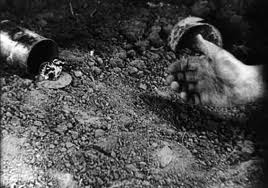 Intet nyt fra Vestfronten
“All quiet on the western front” won two Oscars: Best Movie and Best director. That should set expectation pretty high for this one. The good news is that it live up to those expectation, and more. It still stands today as an achievement.


I read the book by Remarque in my youth and while I cannot say that it was one of those stories that in any way changed my life it did grip me with its hopelessness and its message that war is pointless. At that age war novels are excitement and adventure, guns and cannons. In “All quiet…” those themes become fear and death and hell in all its incarnations, but also friendship and camaraderie, between your mates but also with the enemy. They are also just young men fighting somebody else’s war.


These are messages that come across very well in the movie. Life is the trenches is misery, the war is pointless and we do get included in the fellowship of the brothers in arms. Fortunately the book is too far back in my memory for me to tell in details how far the movie digress from the source, but I dare say that this is one of the better attempts at converting a novel into a picture.


I cannot help comparing it to “The big Parade” since the theme is so similar and the story is almost entirely parallel. Even the few years in between means a major technical improvement, but the real difference is simply scale.


Like in “The Big Parade” we start with the declaration of war and all the excitement associated with it. We are in Germany, which is in itself interesting and also I suppose controversial, and follow a class of boys who are incited by their teacher to enlist and fight for The Fatherland. Here as well everybody are acting as if they are going to a party and celebrate the war as if they had won already. Again I am just shaking my head in disbelief, but this is no exaggeration. That was not an age of information. Without opposing tales the story of the regime stands unchallenged and the regime wanted WAR.


The boy’s passage through basic training is the beginning of their wake up call, but it is when they get to the front that reality hits. And it hits hard. Death is a thief and nobody is safe. The first are dead even before they reach the front. Here they are the new batch of cannon fodder, but Paul, Kemmerich and a few others of the new ones befriend some of the veterans, Katczinsky and Tjaden foremost, and they give them a crash course in survival at the front. And that is basically the name of the game. Patriotism quickly evaporates and is replaces the naked struggle to survive.


One by one the mates from school disappear. Grenades, machineguns, mines or disease. We see Kemmerich loose his legs at the infirmary and then die from his wound in front of Paul. In one of the strongest scenes we hear an echo from “The Big Parade” when Paul is lying in a grenade hole in no man’s land together with a French soldier he first tried to kill, then tries to keep him alive.


Another parallel is a visit to a farm with French women. This is not as drawn out as in “The Big Parade”, but conveys the same longing for normality, that despite the war we are still human.


But maybe the strongest parallel is how much life at the front changes the young men and how they become alien to their home. When Paul returns home on leave after his convalescence he finds that people there are like aliens inhabiting another planet. Have they really no idea what it is like at the front, that this war is pointless? He returns to the front feeling more at home there than in his old town. At least people here know the truth.


“All quiet…” is from 1930. This is the early early days of sound pictures. Studio sound is difficult, outdoor sound was unheard of and dubbing, what is that? Yet it works surprisingly well here. The battle scenes are very realistic and detailed and expertly convey the terror of the trenches. This is also a period where the filmmakers are trying to shake off the bad habits of the silents like exaggerated gestures and general overacting. There are periods, especially in the beginning where “All quiet…” suffers from those ailments, but it could be worse the age taken into consideration.


One of the things I was thinking of watching it, was how a movie was received in 1930 that looked at the war from the side of the enemy. Of course it makes no difference if the boys were German, French or English, but still, the Great War was only 12 years past and people in most places the movie was released was used to thinking of Germany as the great enemy. What a shocking experience it must be to find out that your enemy is as human as yourself, with cares and love and family. It is so much harder to kill when the enemy is not a demon.


I have seen “All quiet…” twice now and both times I sat back with that “wow!” feeling. It makes a massive impact. If that is a measure of quality then this is top notch. But do not show it to kids on the way to the front. They may not want to go after all.
Posted by TSorensen at 22:01