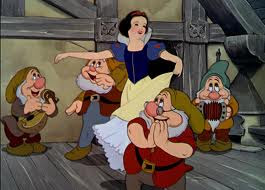 Snehvide og de syv dværge
“Snow White and the Seven Dwarfs” is the first of a series of classic Disney feature length cartoons. With “Snow White” it does not get more classic than this and it is a difficult movie not to like. Virtually everybody knows it and grew up with it, so watching it is a trip back to childhood. The question is, does it live up to those rosy memories and has it been able to stand the test of time?


The answer is a hesitant yes.


It IS adorably sweet, the technical quality is amazing considering this is the first attempt ever to make a feature length cartoon and the songs are, well, I do not even have to mention the songs: Hey ho, hey ho, its home from work we go…


As a child I generally focused more on the sidekick parts than the leads. The sidekicks are where the laughs are while the leads were generally too serious for my taste. The dwarves are excellent sidekicks. They are funny, varied, silly and just enough involved in the story to make them important. The song at the party where they all get introduced has been shown on Danish television for Christmas since before I was born and the Danish lyrics are so ingrained that hearing it now for the first time in English is a little bit odd, but also adds that nice spice of novelty.


But I was a bit hesitant in my confirmation before and the deeper source is probably its age. At times the sweetness is almost too much. Fortunately we have an evil queen to spice it up a bit, but it is barely enough to offset the über-cuteness of Snow White. The prince that saves her in the end is so flat that he is just a symbol and, well, it just annoys me when people speak in rhymes. It does not make it poetic, only artificial.


The story is really simple and very little actually happens throughout the movie. Instead the songs take up the major part of it and everything therefore depends on how well they work. And fortunately they work very well.


Seeing Snow White again makes me very happy and the DVD I got contain a ton of extra material. The part about the making of it is very interesting and it is stuff for thoughts that Disney gambled the entire studio on this feature length animation, an experiment never done before, and only finished it just before release. A real pioneer effort.


Then in the second part of the extra material we learn how Disney founded an empire on this movie and has been milking the cow shamelessly by rereleasing it every decade since. I don’t mind that they make money on it, but it somehow takes the innocence out of it to learn what sort of money machine it is.


There are lots of bucks in sweet little princesses.
Posted by TSorensen at 20:42