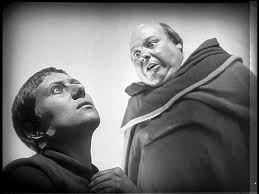 Jeanne d'Arcs lidelse og død
When first I saw ”La Passion de Jeanne d’Arc” a year ago I was disappointed. This is supposed to be one of the best movies ever and by our own celebrity director Carl Theodor Dreyer to boot so anticipation was high and of course impossible to redeem.


Now I have watched it a second time with much less anticipation and my view of it is a lot more nuanced now. At least I can see where the acclaim comes from. I would not say that I am sold, but I do like it better.


“La Passion de Jeanne d’Arc” is a difficult movie to be critical about. In many ways it is raised above criticism. I already mentioned the rating it receives in the international community, but also the topic itself is fraught with controversy.


Jeanne d’Arc is an official saint. Anybody criticizing her or anything relating to her is messing with a major religion and everything relating to that in terms of hurt sensibilities and religious dogma. Secondly she is a national hero in France and no joking. I have been to Rouen and seen the monuments they made for her. Even today she is a national symbol surpassing even Napoleon.  When Dreyer wanted to make his Jeanne d’Arc movie in France and a rumor was floating that Lillian Gish would play the part of Jeanne d’Arc there was an outcry. A foreigner will make a movie with an American as Jeanne d’Arc? God forbid!


Fortunately it was not Lillian Gish who ended up playing Jeanne d’Arc but Renee Falconetti, a theater actress with a much more naturalistic acting style.


So when I say that “La Passion de Jeanne d’Arc” is not top rank I am sticking my neck deep into a swarm of wasps. What I actually just mean is that an hour of clerical interrogators questioning a girl following by 20 minutes of burning is not really my idea of a good time.


But less can do. Once you realize that not much more than this will happen you can go into the details and there is quite a lot of reward there.


Jeanne d’Arc has been captured by the English army during the hundred year war. In their eyes she is an enemy general and a dangerous one at that because she can fire up the local population of France with her religious and nationalistic fervor. Therefore she must be eliminated and preferably in a way to deter any copycat actions. As a court case the result is given in advance. She must die.


Therefore it may seem odd that it is the church accusing her and making a lot of fuss out of it. Why not just condemn her and be done with it? Because there is something much much bigger at stake here.


The crisis is on at least three levels.


Every party going to war believes that God is on their side. In WWII the German soldiers had written on their belts “Gott mit uns”. Then what about the other side? If God is on our side He can hardly be on their side. Because if He is we have chosen our side wrongly. Thus Jeanne d’Arc must be wrong. God cannot be allowed to be seen fighting on the French side.


Secondly the church deal in absolutes, at least in medieval times, but for many segments of the religious community it is not so different today. There is one answer, the right one, and everything else is false. It undermines the authority of the church so any freethinker is quickly stamped a heretic and disposed of.  Jeanne d’Arc challenges church dogma and is dangerous and it is important that the public and the rest of the church reject her.


Finally, and that is the most interesting point and the one mostly explored in the movie, there is a personal element. All these clerics have devoted their life to a belief and Jeanne d’Arc is challenging it. If she is right then they are wrong and they have been living a lie. We see the clerics react in different ways to this challenge. Some are mocking her, refusing to consider the challenge. Some are furious with her. It is terribly infuriating when somebody is trying to pull the blanket from under you. It is a personal affront. And some are doubting themselves, wondering if she is right after all and that they are doing a terrible mistake. The inner battle is most visible on the older monk, who was in the beginning engineering a trap for her, but later stands in the doorway looking at her, his thoughts in turmoil.


So it is very important that Jeanne d’Arc admits that she is wrong, that it was all just some misguided girl confusing Satan with God. It is not enough just to burn her.


And in this endeavor they fail. Despite all the pressure and cunning and psychological terror they inflict on her she cannot give up her belief and so she becomes a martyr and in death she wins.


It is difficult not to see a parallel to religious fanatics today who die for their convictions with the rest of the world busy dismissing them as misguided fools. And I will probably take a lot of heat for saying that, but the analogy is there. Combining a religious and political agenda is dynamite, so while we see all these clerics as sadistic hypocrites in some place we also understand them because Jeanne d’Arc is dangerous and not just from their point of view. We just happen to sympathize with her cause and her persona.


What Dreyer achieves in his film is to focus entirely on this battle and does it by showing the faces of people so close that we can see the wrinkles and the warts and all the feelings and thoughts running through their heads. This is an angle we rarely see in Jeanne d’Arc related movies and that is why this one is special.


If this is your focus when watching it instead of expecting a popcorn flick then I will grant that it is a good movie.
And then I forgot to mention that the soundtrack "The voice of light" is absolutely amazing.