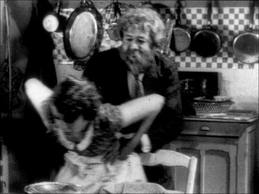 
A real Christmas movie is soft and sweet and usually have a morale like: “if you do well/behave/are generous, you will get greatly rewarded and Santa will give you nice presents”. “Boudu Sauve des Eaux” is the direct opposite. If anything it is an anti-Christmas film. Christmas is not even mentioned and it takes place during the summer and generosity is rewarded with insult and ridicule.


I did not look forward to see “Boudu Sauve des Eaux” again. I did not like it the first time and even though I am better attuned to it now I still do not like it. The problem is that there are nobody to root for in the movie. Everybody are deeply unsympathetic and this is not a “Bad Santa” movie where scumbags become good in the end. People are who they are and do no suddenly turn nice. You might say that this is a refreshing outlook and very different from Hollywood template, but dammit it makes it difficult to like this movie.


In a sense this is the opposite of a “My Fair Lady” story. The tramp Boudu (an always excellent Michel Simon) is saved from drowning by the bookseller Edouard Lestingois (Charles Granval ), who then takes him in and decides to do the right thing and help Boudu get on his feet again. If this really was the story we would expect an ugly duckling story where Boudu becomes a real gentleman and shows his gratitude to his benefactor and we get some laughs as this oaf attempts to maneuver in the world of the bourgeois. Nothing could be further from this story. Boudu is an asshole of a tramp that does not care shit about anything or anyone except to follow his basic (low) instincts and do and say whatever he feels like with a total disregard to other people’s feelings. He did not wish to get saved, he do not care about his benefactors and he chafe under the restrictions of the bourgeois. In short, a mockery of the “My Fair Lady” plot.


But this story is not the one director Jean Renoir wishes to tell. Boudu is an agent, but not the focus of the story. Instead this is an exposé of the hypocrisy of the middle class bourgeois. A quick glance at the portfolio of Jean Renoir should make this obvious as it always figure as a theme in his pictures. Boudu is the agent that allows us to see all the double standards of the Lestingois household.


Edouard Lestingois wants to save and help the poor tramp, but he absolutely does not listen to him. He did not want to get saved, he does not want to be gentrified, but Edouard considers this the most natural thing in the world. Nice cloth, polished shoes and table manners and you are a gentleman. All the while Edouard has an affair with the maid Chloe (Sévérine Lerczinska) and treats his own wife Emma (Marcelle Hainia) with scorn.


Emma cannot see why on Earth Edouard wants to keep Boudu in the house and far into the story it seems that a primary reason is to annoy his wife. She is positively upset about this savage, until the point when Boudu throws his (fleeting) sexual attention on her, at which point she becomes his protector.


Chloe, the maid, seems for a while to be above the hypocrisy. She gently refuses Boudu’s advances on her and is (rightly) upset about the mess he creates. That Edouard is hitting on her I suppose is part of the reality of life for a maid. However when Boudu suddenly wins 100.000 Francs she totally falls in love with him and they quickly get married. His money are soooo charming.


We get a few other examples as well. In the park in the beginning of the movie Boudu losses his dog and everybody including the police ignores him and send him on his way. However when a respectable lady loses her expensive dog, everybody fall over themselves to help her. The double standards of society. The crowd watching Edouard drag Boudu out of the water praise Edouard for his heroism and give him a medal. For Boudu himself they could not care less.


In the end Boudu exploits the opportunity to escape the chafing bonds of the middle class when his boat capsizes on his wedding and he returns to the freedom and careless life of a tramp.


There is a certain amusement to the utter disrespect Boudu is showing for his benefactors as he trashes their lives and I did laugh a few times, but mainly I just felt disgust for everybody in the movie. Stepping back a moment from the story itself I was most impressed by Marcel Simon. That man was a genius actor. He deserves a lot of recognition. Nobody can play scum like him. Not even Billy Bob Thornton.