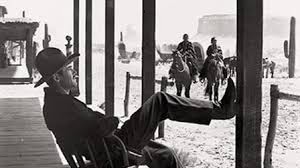 My Darling Clementine
Wyatt Earp, Doc Holliday, the Clantons and the showdown at the OK corral. I hardly need to say anymore. This is one of the most famous legends of the old West and it has been used as source material so often that I have to stifle an involuntarily yawn.

To take on this story is almost a rite of passage for directors dabbling in the western genre. There were at least two attempts before this 1946 rendition and there has been countless since.  Yet, without being an expert on the subject, I get the feeling that John Ford’s version is one of the better ones. I do not think anyone would claim this is the true story of what happened back then in Tombstone, but it is certainly an entertaining story and one told with a skill so I actually do not care if these characters actually existed.

I have come to associate John Ford films with Henry Fonda. He certainly seems to be a recurrent feature ever since “The Grapes of Wrath”. In “My Darling Clementine” he is Wyatt Earp himself. He and his brothers are driving cattle to the west (making him a cowboy, I suppose) when they decide to make a prolonged stay in the hamlet of Tombstone. See, somebody rustled their cattle and killed one of the brothers so Wyatt jumps at the open position to become marshal in the village as a platform for finding the culprits. Wyatt has some previous experience in marshalling so he is pretty good at it.

Tombstone is not your average village. I flatly refuse to call it a town as the images only seem to reveal about a handful of buildings.  Yet it has saloon, hotel, jail and a barbershop plus a surprising amount of people. When Wyatt arrives the place is practically lawless and the “underworld” seems to be headed by the famous Doc Holliday (Victor Mature). He is what you might call a gentleman bandit and has been keeping his own justice in town, mainly through respect of his shooting skills. Clearly I was wrong; Tombstone IS your stereotypical western village of sound, sight and smell.

I actually do not mind. It is fun to see a movie that takes the western myth serious and elevates the cliché to actual characters and places. The cacti are very decorative and I can almost smell the horse dung in the street. Sergio Leone definitely saw this movie, but then you get the feeling he saw them all.

Wyatt and Doc are crossing swords a bit, make a truce, and actually become sort of friends. The good cop and the good bandit. That is, until Doc’s old girlfriend from back east Clementine Carter (Cathy Downs ) shows up. Then things get a bit complicated. Doc was clearly running from something back east and Clementine is part of that. We never find out exactly what it is, but it is still haunting him. Wyatt however takes a liking to the girl and his efforts to woe her is part of the comic relief in this film. That is meant in the best sense. In this otherwise grim story Ford has generously dribbled subtle humoristic gems. Understated, but funnier for it.

This takes us to Chihuahua (Linda Darnell), the sassy tavern girl who considers herself Doc’s girl, although she is more of a free item, really. She represents the Wild West as opposed to Clementine of the East. Both wants Doc, but he wants neither and Chihuahua fights Clementine all the way. I am not sure Ford intended it that way, but it is difficult not to see this as the symbolic taming of the frontier. The free, rebellious West resisting the influx of the conformity of the East. In the end it must die and so does Chihuahua. Though not by the hand of Clementine, but by the West itself, the real bad guys: The Clantons.

After all these themes have been established it is time for the final show down. We knew it all along; the Clantons took the cattle and killed James Earp. It is no secret. Every time any of the Clantons appear their guilt and evil intent are painted all over them. We are just waiting for Wyatt to find out too. And once he does it is time for the shoot-out at the OK corral.

This is really not a film to see for the story. It is rather predictable even if we did not know the story by heart. But there are plenty other reasons to see it. Henry Fonda is one good reason. The sheer entertainment value, which is considerable, is another. But the main reason is the loving portrait Ford is painting of the taming of the West.

Ford is using stereotypes so they hardly seem stereotypical. There is dust and horses, real men and beautiful women (who never get dirty), good and bad and awfully little in between and honesty between men (unless we are talking card games). It is a love poem from somebody who probably would have loved to be there and because his love is so unabashed we get to love it too. That is no small achievement.

I had an odd thought: are there not more than a few parallels between “My Darling Clementine” and “Back to the Future III”?