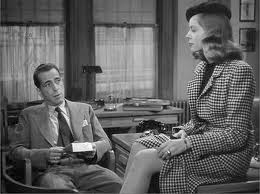 Sternwoodmysteriet
Here is a film I have been looking forward to for a long time. Even before I started taking an interest in older films I heard about this one, that it should be exceptionally good and current enough to be aired from time to time on the local channels. I never saw it though and now it feels like I have been saving it for this very moment.

It is everything I hoped it would be and more. I will immediately bump it up into my top 5 of movies until 1946 and a strong contender to the title as the most entertaining film on the list so far.

The plot of “The Big Sleep” is almost impossible to explain. There is so much going on and nothing is ever entirely clear. There are people with secrets, lifting a corner to the truth, but hiding more with lies and evasions. Here we are not just talking the villains, but practically everyone. Philip Marlowe (Humphrey Bogart) is the private detective, formerly of the DA’s office, but booted for insubordination (of course), who is taking on a job for General (great name!) Sternwood (Charles Waldron), retired. One of his two daughters is being blackmailed and the general want this scumbag to, you know, disappear.

Those two daughters are no ordinary girls. First of all they are unbelievably hot. Carmen (Martha Vickers) plays the little girl with a Lolita pout and sucks on her thumb while she hits on everything male. She exudes sex, but also something far more troubling. Something is not right with her. She is a junkie and deeply involved with the criminal underworld, who are milking her, hence the blackmail.

The older girl, Vivian, is even hotter. This is of course Lauren Bacall and so I do not even have to explain her charm. She is far more worldly and mature than her younger sister but not less involved with the underworld. Her air of mystique never lifts and even at the end we still do not know her secrets.

Marlowe may be able to keep Carmen at an arm’s length, but he is drawn toward Vivian. Hey, who would not be, and their mating dance is a significant part of the film and a reason for its greatness.

But Marlowe is first of all a detective, the kind who never gives up, work on a hunch and with an uncanny ability to stick his hand into the hornet’s nest where it hurts the most. He is also incredibly witty with a choice comment always ready. Dry, but spot on. Especially with the girls. I was genuinely amused by him and often laughing out loud such as in the bookstore where a simple research job turns into serious flirtation as the librarian in two strides change from dry bookseller to a randy maid in heat. The wittiness of the script is another reason for its greatness.

I still do not entirely understand the crime plot. There are so many characters involved and many of them turn up dead before we really find out who they are. Marlowe is always two steps ahead of us as he juggles through the investigation, but he is still two steps behind his opposition as they derail or obstruct him or simply try to kill him. He does not understand himself what is going on but he is struggling to understand and that is fascinating to watch.

Then there is the style of “The Big Sleep”. From the above I would not blame you if had concluded that this must be a comedy. It is hilariously funny in places, but it is not a comedy. It is dark, dark noir. The settings are gloomy. Almost all scenes take place at night with plenty of shadows. It is beautiful in all its shabbiness. Iconic even. Combine that with the fact that practically everybody are involved with something if not outright illegal then at least in the grey zone. This is the iconic underworld of gambling, pornography, drugs and violence. Contrary to most other film noir there is no flashback narration. I am kind of relieved as that particular element was starting to get a bit old on me and it proves that that is not an essential element. In fact, without the constant explanation the going-ons get even more mysterious and opaque and adds to the feeling of being lost in a sea of dark secrets. Essentially this is the main difference between the theatrical version and directors cut of Bladerunner and is why the director’s cut is superior. Talking of Bladerunner, that one is basically a futuristic remake of the Big Sleep. Stylistically they could be twins.

So, who is the better Philip Marlow: Dick Powell or Humphrey Bogart? I started out thinking that Powell must be superior or at least funnier than Bogart. Indeed in the beginning Bogart seems more wooden and dry, lacking Powell’s sparkle in the eye, but as the movie progressed I warmed up to Bogart’s version. Yes, some of the puns are a bit forced, but there is a sincerity to Bogart’s Marlowe that is very likable, almost as if the Powell version has finally grown up, become more cynical, but also more serious. Marlowe works more in parallel with the police than against them, he knows when it is time to pull out and he respects human life, not because it is the right thing to do, but because he genuinely cares. The winning card however is to see him together with Lauren Bacall. I understand why this match caused such excitement in the forties. This is chemistry defined. They bring out the best in each other and those scenes, excellent banter aside, are gems. They are also randy as hell. I can get my pulse up watching and listening to them.

And Lauren Bacall, she is my favorite leading actress of the forties. So many others I have watched and thought, yeah, worked in the forties, but too shallow, or stuck in their time. But not Bacall. She works. Not just because she is stunning to look at, but she can express the entire range, joy, lust, darkness, grief, mystique, anger and you believe it. I cannot imagine a better actress for a film noir. The closest thing would be Joan Crawford, but Bacall does it better for me.

There can be no doubt I will watch this one again. The question is how long I can wait. There is much to enjoy here and so much left to find out.