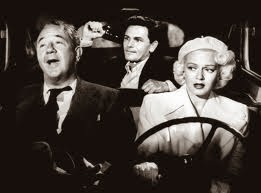 Postbudet Ringer Altid To Gange
“The Postman Always Rings Twice” from 1946 is probably the most famous movie based on James M. Cain’s novel of the same name. It is a decent film, but will in my book necessarily be compared to the other movie based on this book from the 40’ies: The Italian “Ossessione”.

Where most people probably knew “The Postman…” long before they saw (if at all) “Ossessione” it is opposite with me. “The Postman…” will therefore necessarily be measured against that standard.

The first and maybe most notable difference is the style. “The Postman Always Rings Twice” is made in classic film noir style. It has that dark foreboding feeling, the inevitable tragedy as well as the alluring femme fatale and the narration in flashback. It reminds me in many ways about “Double Indemnity”, which incidentally is another James M. Cain novel. The major difference is that the two leads in “The Postman…” are not cold, cynical experts at the top of their game, but emotional amateurs who manage to botch it up pretty well. I am a big fan of film noir and while this one is not bad it just not half as impressive as the pre-neorealism of “Ossessione”.

Where the cast of “Ossesione” feels like real people “The Postman…” look staged. There is a certain theater element, which is typical of Hollywood of that age and usually fine with me, but which “Ossessione” has thrown altogether. It is unfair, I know, but when every scene for the first hour of “The Postman” has an Italian parallel it is difficult not to compare.

In “The Postman Always Rings Twice” the drifter arriving at the gas station is Frank Chambers (John Garfield). A dude with some rough edges, but overall more likeable than Gino. This is mainly because of his apologetic innocence. We are led to know that he is essentially a good guy. What he does, he does for love. In a pinch he will do the right thing, whatever “right” means. Unfortunately that also means that he is almost entirely lacking the feral masculinity and magnetism of Gino. Where we believe Giovanna is swept off her feet by Gino, I get the impression that Cora is exploiting Frank the boy.

Cora (Lana Turner) may have been a hottie back in 46, but to me she looks all plastic. She has the allure of a Barbie doll, which compared to Giovanna’s sensuality is rather shallow. She is the petulant child who got stuck on a gas station with her old fart of a husband and is now looking for a new plaything. Both women want to get away, to be more than they are stuck as they are in their lives and both use the drifter as leverage. Here again I am being terribly unfair. Visconti did not have to struggle with the production codes and could do things on film that an American director in the forties could only dream of. Visconti could show sexual tension, where Tay Garnett, the director of “The Postman…” would have to rely on a colder and more subtle passion. That is done with some vamp looks from Cora and lopsided smiles from Frank and by declaring their love again and again. Unfortunately I do not really believe them. They are having so many doubts and throw so many accusations at each other, especially in the second hour that the entire film could have been resolved by one person walking out on the other. There are no children between them (until the end) and the bonds that bind them are tenuous at best. I am simply missing a good reason for these people to stay together.

The third violin, Cora’s older husband, the proprietor of the gas station is almost a clone in the two movies. A friendly older man without a clue what is going on between his wife and the hired hand. Both men even have an affinity for music. A difference however is how our impression of him changes through the film. Giuseppe starts out loud and boisterous, but reveals a sympathetic side as the movie progresses. Nick (Cecil Kellaway) on the other hand starts out as the friendly and innocent old man, but reveals a total disregard for the feelings of people around him, which makes him appear cruel. The result is that while in “Ossessione” we realize what a horrible thing it was to kill Giuseppe, “The Postman…” almost makes us feel that Nick had it coming. As a consequence Giovanna and Gino’s fate feels like God’s wrath, while Cora’s and Frank’s merely feels like the punishment for botching up the whole thing.

Where the two films are entirely parallel for the first hour they then depart in a big way. “The Postman…” develops into a courtroom drama that can only be described as a farce. Now, I am not a fan of courtroom dramas. In fact I tend to avoid them. But this one actually appealed to me in its absurdity. What looks like a clear case of conviction, punishment and end turns out to be a sporting event between two lawyers too smart for their own good and the entire court cased flies by while we along with Cora and Frank are looking from the sideline with a gaping mouth and incomprehension in the eyes. What on Earth just happened?

From this point we get to see how unstable Cora is and how innocently naïve Frank, despite his tough demeanor, is. Cora responds to every event with wild flamboyant excesses of emotion and is busy digging their own grave. Frank is just standing there trying to make sense of it. Yes, there is also an insurance claim, but here the two films differ again. The insurance money was the real objective for Giovanna. She coldly manipulated everybody, particularly Gino, to get those money. Cora was not even aware of the claim. People around her think the money was her motive, while really she was just trying to avoid ending up nursing a paralyzed old woman in Northern Canada (which incidentally is very funny. That was a laugh when Nick declared his plan for her).

Finally in the end the storylines are meeting again. Giovanna and Cora are pregnant and both couples have finally made up when the postman rings the second time. I do not know how many times I have wondered at drivers in movies who are able to look at their fellow passenger for extended periods without any consequence to their driving. I have kept telling myself that this will end badly but it never does. Hollywood drivers do not really have to look at the road to drive a car and they can certainly kiss and drive. So it seems almost an intertextuality when it is exactly in such a situation that fates hit Cora and Frank. To me it just underlines the impression that Giovanna and Gino may have been hit by the wrath of God, but Cora and Frank managed to botch it up pretty well themselves.

This is not a bad film. Ultimately I just liked “Ossessione” better.