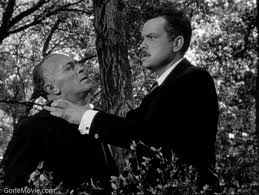 Den Fremmede
I have come to expect great things from Orson Welles. “Citizen Kane” and “The Magnificent Ambersons” set a high standard and measured by them most films fall short. That is a bit unfair towards “The Stranger”. It is an okay film, but nowhere close to “Citizen Kane” and so I cannot help being a tiny bit disappointed.

“The Stranger” employs a theme, which has become very frequent in American film over the years; the enemy within theme. Whether it is aliens from outer space, vampires, commies or psychopathic killers they are lurking, hiding in plain daylight, disguised as they are as you and me. I do not know why particularly American films favor this theme. As far as I know America has not been particularly infested by these miscreants. They tend to prefer South America, as far as I know, but there is no doubt that there is a dramatic edge to that theme.

“The Stranger” then combines this theme with the theme du jour of the postwar years; the hunt for Nazi criminals. I think everybody was quite shocked by the horrors that were uncovered at the close of the war, not least in America where civilians had lived their life at a safe distance from the fighting. People in occupied Europe certainly had an inkling of what was going on, enough that it was a priority not to be caught by the Germans, but even the Germans themselves claimed surprise when the concentration and extermination camps were opened. Just a few years earlier nobody spoke of Jews, gays and Gypsies, but suddenly people found out why they had been fighting the war. The rage against the Germans and the Nazis in particular mounted and “The Stranger” was such an outlet. A Nazi became the monster du jour, the worst imaginable creature and one for which there was no excuses. A few years later Commies would take that place, but in 46 the Nazi was bad guy number one.

So, there is a Nazi going around among us. He looks and acts like us, but he is very very dangerous.

Pitted against this devil in disguise we have our hero, the Nazi hunter, our own van Helsing, going by the civil name Wilson and played by the always good Edward G. Robinson. Here is a guy whom I am getting more and more respect for. His character may not be as interesting as in “Double Indemnity”, but he does the sly but subdued investigator very well. There is a Colombo element to his character that fit this normally gruff and boisterous character.

Unfortunately he is dealt a difficult hand. There is not much of a mystery here. From the moment we see Charles Rankin we know he is our bad guy and it takes Wilson only a single, but very obvious clue to see the obvious. From then on he is just looking for proof and in the process gambling with the life of Rankin’s young and newly wedded wife Mary Longstreet Rankin, played by the beautiful Loretta Young.

Rankin is such a giveaway. Of course we see him found and identified by the confirmed Nazi Konrad Meinike (Konstantin Shayne), but even without that information this guy has “bad guy” written all over his piggy face. I found myself wondering why Welles had chosen so obvious an actor for the role until I realized that Rankin IS Orson Welles. This master of disguise had deliberately made himself into a pigfaced brooding asshole.

With the mystery element out of the picture the remaining question is how much damage he will do until he is caught, especially to his lovely wife. To keep the birds of prey at a distance Rankin invents stories for her to explain what is going on and she is largely buying it. It is a bit of a stretch though. I feel that killing the dog should in her eyes have been quite unacceptable, but somehow he gets away with it.

On the up-side this film has some excellent atmosphere. The filming is interesting with Welles famous skill for lights and shadow and curious angles. Also the setting in the little town where everything is all so happy-happy is an interesting contrast to the hideous crimes this man represents. The shopkeeper/man-of-all-trades is a laugh, especially when he put on that silly hat to play checkers and of course we get Edward G. Robinson.

On the downside I have recently seen two films where it was done better. Hitchcock’s “Shadow of a doubt” takes that enemy-within theme to a pinnacle, which is difficult to match. The parallel is obvious, but uncle Charlie is so much better at keeping the illusion going and as a sinister character he beats the hell out of Rankin’s nervous wreck.

The other film is Gaslight, where Paula is being driven insane by her wicked husband to neutralize his crimes. I am not sure if Rankin manipulates Mary in order to keep her or to use her as a shield against the charges against him, but he certainly manages to drive her frantic. For all her skill however Loretta Young cannot match Ingrid Bergman and that I think is mainly a script problem. She has to believe his crazy stories and ignore her family even when it seems a stretch.

I really wanted to like this one, it sounded so promising, but it was just okay. Okay is fine for entertainment, but it does not make it memorable.