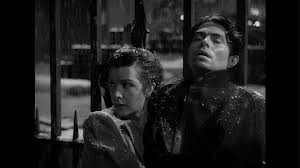 Natten Uden Nåde
There can be no doubt that Carol Reed’s ”Odd Man Out is a technical masterpiece. From start to finish we are served an extravagant feast of light and shadow. Close ups and odd angles. Framed faces and anguish in the eyes of the characters. We even get a dose of surrealist dream visions to top is off. It is quite delicious really.

Unfortunately I am not sure the story itself can carry this film. It is not just that the story is thin, it is more that I am not sure where it is going. The Book says this is the story about how alone you can be, but I am not convinced. It is a bit odd.

The unnamed Northern Irish city with a major port can almost only be Belfast and the “organization” fighting an armed struggle against the authorities can almost only be IRA and that makes this the first film on the list about the trouble in Northern Ireland. Only last week I heard that there is trouble there again and it is so sad with these conflicts that just never end. I have been to Northern Ireland and really they are the nicest people in the world and yet home to this ongoing insanity. If anything, that is also the (or a) message of this 67 year old film.

Johnny McQueen (James Mason) is the leader of a cell of the “organization” (read IRA). They need funding for their cause so they rob a mill and in the process shoot a guard to death. Johnny is wounded and gets lost during the escape and the rest of the movie is essentially Johnny’s odyssey through the city this cold and wet evening and night, and the search for him.

He meets two nurses who boots him out when they find out who he is, a taxi driver who dumps him at the junkyard and bar staff who just want to get rid of him. Shell (F. J. McCormick) is a bum who sees in Johnny McQueen the value of handing him in to the highest bidder (currently Father Tom, though his price offered was a bit obscure). Shell’s roomie, the mad painter Lukey (Robert Newton), desperately wants to paint Johnny and even the (sort of) doctor who end up treating him does it to finally get some recognition from his peers.

Real sympathy Johnny only gets from his compatriots and his girlfriend Kathleen (Kathleen Ryan). Two of the gang members are lured by an old matron who turns out not to be as sympathetic to their cause as they thought and a third is cornered in a tram by the police. That leaves Kathleen who wants to follow Johnny out of love rather than politics.

It is striking how little support the gang gets. Oh, people are afraid of them, but they just want to keep out of trouble. None of them are sympathetic to their cause. So, what are a group of fighters with hardly any backing, who rob factories and shoots people but simple gangsters? As simple gangsters they are vermin to be cleansed from the streets and that is essentially just a police matter. It is this reduction of political ideals to simple crime that is almost the most devastating about the film. It takes away their raison d’etre and it removes our sympathies for the characters. As faceless as the police inspector (Denis O'Dea) is he got it right when he tells Kathleen to stay out of it. Theirs is a lost cause and it is now just a police job.

Johnny had hinted at his doubts to begin with, but I fear that was mainly to score some sympathy points from us. Despite a nascent change of heart he is fundamentally a common criminal and that I suppose is something he comes to realize through the night. Not a real person, just a criminal.

If this destruction of a character, I did not really like to begin with, is the object of the film then it does a pretty good job. You might say that this is an English film and that it would therefore be naturally inclined against IRA terrorism, but I still think it is quite clear-sighted to see these bandits for the vermin they are rather than soldiers in a war and so I cannot really consider this a political film against the republican cause in NI, rather it is a film against terrorism in general and that actually makes it relevant even today.

As already mentioned James Mason is Johnny McQueen. He is charismatic and it is always a pleasure to watch him and especially hear him. He is one of those British actors who are blessed with a very pleasant voice. I cannot help comparing him to Sam Neill (although he is not English at all) both in looks and intonation. Trouble is that no matter how much I like James Mason and how good he is at being lost and lonely in the Belfast night his character is just not likable. Will he make it out of town? Will he manage to avoid the police and survive his wounds? Parts of me hope that he will not and instead I am rooting for the police inspector. I am not sure if that is the intension. Somehow I think the swan song of this gangster is at the heart of the film and that criminal or not he is a human being in bad need of help.

“Odd Man Out” is called a film noir. I think that is stretching the definition a bit. It is dark and brooding. It is fatalistic and with an antihero at the center of things. But it lacks a crucial element: Where is the gorgeous femme fatale?