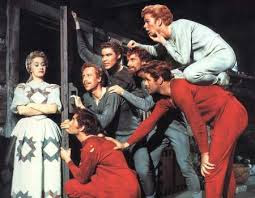 My wife does not like the fifties. She claims it is the whole package, but at the core of it is the housewife’y female ideal. Old gender roles about the ideal family with the happy wife in long skirt taking care of the home all day in a generic suburban development. With “Seven Brides for Seven Brothers” I know exactly where she is coming from. The film oozes those values and ideals and if this was all there was to the fifties I would dislike it as well.

Fans of “Seven Brides for Seven Brothers” should not bother to read on. I did not like it at all and you not want to read the rest of this review.

Very little in this movie makes any sense and the few things that make a little sense requires you to really bend your perception of the world. Let us just start with the beginning. Adam Pontipee (Howard Keel) walks into a frontier Oregon town some time prior to the turn of the century. He lives on an isolated farm with his six brothers and now he is in town to get supplies and a wife. For which reason he breaks out into singing about what sort of perfect woman he would like. Well, it is a musical, so I suppose he would do that.

Considering there is supposed to be one woman per ten men in town he strikes gold immediately when he finds Milly (Jane Powell) who consents immediately (???) to marriage. In a second they are married and rides home to the farm. Milly is super happy so she starts to sing opera about how happy she is to become a housewife in the middle of nowhere. Adam has forgotten to tell her the little detail that there will be another six men at the farm, but she finds out soon enough. One way to look at this could be that she is a lucky girl sharing a home with seven hunky men. Ah, but not in the fifties. Another way would be to feel cheated and be upset, cancelling the deal. But no, again you know, the fifties. Oh, she is a bit upset, but she is a good, well-trained housewife so she takes over the home, get the boys washed and taught some manners and accepts it. Am I watching “Snow White and the Seven Dwarfs”?

Milly’s biggest issue is that Adam does not love her enough and that he just wanted a maid. Well, apparently she does not mind being a maid, she just wants him to be kinder to him. The other six brothers on the other hand are deeply envious and want wives of their own. So, Milly trains them to go courting and before you can say wupediwu the boys are super elegant acrobatic dancers. There is a barn raising and an accompanying ball, which proves to be an excellent chance to impress the girls. Since the boys are now professional dancers and highly skilled gymnasts the girls are suitably impressed, but less so their boyfriends. In fact six of the girls seem to forget all about their local boys and jump into the arms of the six bushmen.

Following the stunning success (which included trashing the very barn they came to build) the boys decide to emulate the Roman raiding of the Sabine women. They go into town in the night and kidnap six girls. The townsfolk are of course upset about that and since they have no helicopters and round the clock new service they form a pose to get girls back. Unfortunately because of an avalanche blocking the pass leading to the Pontipee farm they have to turn back and wait till spring.

Milly is miffed by this stunt and keeps the girls inside and the boys outside. It is does not take long though before have a massive six-double case of Stockholm syndrome on our hands and the girls think that the brothers are so manly and nice that they do not want to go home. When the pass reopens and a new pose arrives to take the girls home, a priest in the pose hears a baby cry (Milly’s, so Adam did show her some affection after all) and he cries “Oh no, not that!”. Have the girls had a baby? If so, that would mean sexual abuse, a thought not very far away considering the circumstances, six women held as sex slaves on a remote farm. When questioned about the baby I am sure the girls will try to protect the boys, saying that it is Milly’s and that the boys have been nice to them, but no. The girls all claim it is theirs, because, holy cow, a child out of wedlock is a terrible thing and the only way to solve it is to marry the girls to the fathers. Think about it for a second. Kidnapping, sexual abuse? Yeah, let’s marry the girls to the offenders. Makes perfect sense right?

So much for the story. I doubt I spoilt anything really. Knowing this is a 54 musical we know where it is heading ten minutes in, just not that it would be this stupid.

There is no logic anywhere, the brothers are somewhere between stupid, extremely macho and sissy boys and the role of women Neanderthal at best. I know a musical means singing a lot, but rarely has it been done so completely out of context with dancing so absurdly mismatched with the story that it feels like two different movies. I get a feeling here that the producers took the special “laws” of musicals and drove them out on an absolutely absurd tangent claiming that idiocy is okay in a musical as long as it gives a good show and to hell with the audience trying to make sense of this.

I have been thinking hard about something positive to say about this pile of nonsense and grudgingly I must admit that the tunes are catchy. Some of them have gotten stuck in my head and I hate them for it. As long as I can skip Jane Powell’s ventures into opera land I actually think I could enjoy the soundtrack. Also the acrobatic dancing is impressive. Extremely mismatched to the story, but very nicely executed.

Yet this is a musical I would prefer to forget sooner rather than later. I feel 10% more stupid after watching it and unless I finish this review very soon I will become a blabbering idiot.