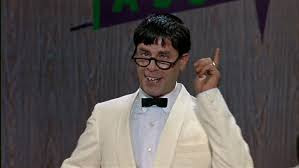 
Okay, I guess it is no secret by now that I am not a fan of Jerry Lewis. His form of comedy, vastly over played and infantile (Jim Carrey’s style) grates on me and he can single handedly ruin a movie for me. “The Nutty Professor” is no exception.


The curious thing is that there is potential in this movie. The Dr. Jekyll and Mr. Hyde story of course is a classic. So is that of the clumsy, geeky guy taking a step too far to get accepted. Both stories are classics because they work. We are interested, even fascinated by the split personality theme because we all consist of good and bad and so Dr. Jekyll and Mr. Hyde are distills of something we recognize, and Hollywood of course loves that story. It also loves the geeky guy who wants to be popular, maybe even more so and a movie like “Weird Science” come to mind as a good (and fun) example.


In any case with two so solid stories it is hard to go entirely wrong. Lewis is the geeky professor Kelp at a high school, who is good at chemistry and little else. He is bullied by everybody and decides he has to change. Body building does not really do it for him, but chemistry does, so Kelp concocts a mixture that turn him into a smoking hot, super cool, bloated oaf: Buddy Love. Mr. Love can sing, play piano and act cool and smooth and is soon the hottest guy in town. Unfortunately the spell only lasts a limited time before he reverts to being Kelp.


Professor Kelp likes the student Stella Purdy (Stella Stevens) and she is sympathetic to him. As Mr. Love, Kelp goes full throttle on her and she is both attracted and repulsed by her. Especially she finds it disturbing that he often disappears with hardly a word. Eventually of course it is revealed that Kelp and Love is the same guy and Kelp gets his girl.


There is some potential for drama, but it is mostly traded for comedy. The comedy here is the helpless Kelp and the obnoxious Love and that stands and falls with Jerry Lewis. If you like his style you are likely to find this movie hilarious, but if, like me, you find his form of comedy annoying and grating then there is not much left to save the movie, certainly not in the sense of comedy. Stella Stevens is nice as a sweet looking girl, but her job is only to let Lewis play up to her. Del Moore as the principal Dr. Warfield is fine as the straight victim of Lewis gags, but again that is just what he is. This is a Lewis movie, doing the Lewis stuff. I understand why the movie was remade, it has a lot of potential if you just replaced the comedian.


Then of course there is the highly suspect issue of a teacher with a relationship to a student. I understand this is a very definite no-go, but here it is not questioned at all.


I should say something nice and so I will admit that the colors were great and the music was nice. Apparently the famous Edith Head did the costumes and it shows. I wish there was more I could mention, but a comedy that I do not find funny is just a flat experience.
Posted by TSorensen at 23:57