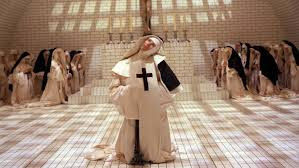 “The Devils” is the first of three movies that were added to the List for 1971 in the big tenth edition revision. A year with many movies just got significantly extended. In the case of “The Devil” I think it was unnecessary to include that one. At least if they wanted to cater to my taste. I did not like that movie.

The story itself is interesting enough. In the early seventeenth century the French king, or rather his puppet-master, Cardinal Richelieu (Christopher Logue) wanted to affirm his control over the French countryside by removing the town walls protecting provincial towns. This would also make it easier to cleanse France of protestants. Loudon was a holdout eager to keep its wall. The struggle to keep the walls was led by a priest, Father Grandier (Oliver Reed). To get to the town walls Richelieu’s henchman Baron de Laubardemont had to get past Grandier. Turns out Grandier had a weak spot. He liked women. A lot. And women were madly in love with Grandier. At the Ursuline monastery the nuns, led by Sister Jeanne of Angels (Vanessa Redgrave) dreamt of Grandier as well and when he turned them down Sister Jeanne went bananas and claimed that Grandier is the devil and had raped the entire monastery. This is something the Baroncan could use and with the help of the inquisitor, Father Barre (Michael Gothard) they were soon ready to burn Grandier on the stake.

So, this is a story about religion as a tool for political gains. It is also a story about the insanity of witch hunt, and it is the story of sexually undernourished nuns and how far they will go when refused.

All this is potentially interesting. Add the period element and I am definitely open to it.

But this is the early seventies where anything can be ruined by making it an artistic expression. Ken Russell did not go for a realistic or even a mystic expression but went stylistic instead. All out. In order to throw in a lot of symbolism he created a dream like (or nightmarish) world, where the town is all white bricks, the monastery is white and entirely empty, the cathedral black and full of straight lines, doctors magicians from the world of Jean-Pierre Jeunet and practically everybody except for Grandier madmen and women.

This is how Godard would make a period piece and somehow I am not surprised to find that in the early seventies other directors were going the same way. The symbolism and stylisism (is that a word?) completely sabotages the movie.

There were times, many times, where I was wondering if I really wanted to go through with this and the only reason I can think of is that I am a completist.

“The Devils” caused controversy and various churches condemned it and still does. Seriously, perceived blasphemy is the least evil of this movie. It is the destruction of a worthy story by artistic expression.

Not recommended. Just skip it.