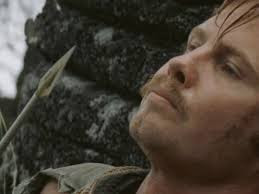 A bunch of guys go on a survival trip that does not exactly pan out as expected. Does that sound familiar?

I do not know how many versions of this tale I have watched over the years, but they all have gotten blurred together. Some are good, some a wacky, even crazy and some are very disturbing. I seem to recall watching something with Kevin Bacon some time ago… Anyway, the mother of these adventure gone wrong movies is “Deliverance” by John Boorman.

Four city-dwellers from Atlanta heads into the backcountry to ride down a wilderness river before it will be drowned by a dam. These four guys want to do this in two canoes, but are clearly very unfamiliar with the river and population of the region around the river.

Lewis (Burt Reynolds) is the survivalist enthusiast who came up with this idea. He is on his own little Rambo trip and clearly gets a kick out of this. The other three are Ed (Jon Voight), Bobby (Ned Beatty) and Drew (Ronny Cox). They are merely passengers on this stunt, sceptic, but playing along.

In typical arrogant city-dweller style, they treat the local hillbillies with (a perhaps deserved) contempt and completely underestimate the rapids of the river. Soon both will (literally) screw them over and getting out of this alive is all they can hope for. Unscathed they are not.

On the positive side, there is some pretty amazing photography here. The river is dramatic and the ride down the rapids is exactly as exhilarating and wild as you could hope for. In fact, that river is pretty insane and the idea that this natural marvel should be swallowed by a dam in nothing short of criminal. As a critique of environmental sabotage, it works. As a comment on human folly in challenging nature it also scores points. The arrogance of these people evaporates completely as they realize their own inadequacy.

What works less well is the guilt trip. It was a super bad idea to go on this canoe ride with no respect for the terrain and I understand that there is a collective guilt over what happens to Drew. Yet, the movie spends a lot of energy on remorse and guilt over what happens to the hillbillies. I will not spoil the movie with too many details, just say that given the situation they were put in by the hillbillies there was little else they could do. According to Hollywood morality it would be almost a crime not to do what they did with them. Yet, for half the movie these guys are consumed with guilt to the exclusion of all else, not for going on the river in the first place, not blaming Lewis for setting this up or for Drew and his family, but for what happened to the hillbillies.

One thing is that it is difficult to work out, another is that it totally eats the last third of the movie. When they finally get out of the water, I expected the movie to end and that was it, but instead we get a very protracted Lord of the Rings size ending focusing singularly on this guilt trip.

My experience with this movie was therefore a mixed one. There were great parts but what happened on the river, the actual drama, fills relatively little compared to their dealing with the trauma and to me it simply veers off in a strange direction.

Also, it must deduct that the production company wanted to cut cost and have the actors do their own stunts. That is pretty irresponsible.

It is a moderate recommendation from me.