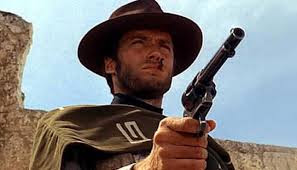 The early seventies was a period where conventions were turned upside down, for better or worse, and in movies the classic Western genre was no exception. Clint Eastwood, the face of the Sergio Leone western, went back to his man-with-no-name character in his second movie as director, but he did something decidedly different with it.

A stranger (Clint Eastwood) rides into a seemingly peaceful village called Lago. Them folks don’t like strangers and he is almost immediately accosted by some ruffians. When they try to rough him up, he kills them. Just like that. A young woman tries to catch his attention, then turn bitchy on him and he takes her to a barn and rapes her. He stays overnight in a hotel and dreams of the former marshal being whipped to dead while the townspeople stand passive by. Then, the day after the townspeople want to hire the stranger to protect them against three banditos, expected to arrive shortly to exact a revenge for being arrested in the town. The three banditos are those who whipped the marshal to death. The townspeople are so desperate they offer the stranger completely free hands, anything he wants.

This is where things get weird. Up to this point this looks like another version of High Noon or Seven Samurai, but The Stranger’s preparations are decidedly odd. A midget is setup as sheriff and mayor. Stuff are given away to Indians and Mexicans. A barn is taken down. The saloon is being ripped of drink and so on. Yeah, they do some practice shooting, but the townspeople really are no good. The Stranger wants them to prepare a fiesta, a “Welcome Home Boys” banner and paint the town read, while renaming the town “Hell”. By now the townspeople are getting royally sick of him and wonder if it is really worth it, but the Stranger seems to have an eye on each finger and stops any attempt to get at him. Also, it is becoming clear to us that they had more than a finger in that murder on the Marshal. What happens then when the baddies show up? Who are the real bad guys? And who is this Stranger?

There is a strong element of the surreal here, especially around the stranger’s identity. It is as if the dead marshal has come back to exact his revenge on the town, to shown them how pathetic and cowardly they are and how they are all complicit in the crime. The guilty town is emphasized by the strange fact that there is not a single child around (except for two Indian children), children being by definition innocent. Is the stranger the town’s guilty consciousness tearing it apart, personified in the judging stranger?

The morale is clear enough: passivity is complicity. If have the capacity to prevent a crime , it is criminal not to stop it. A message very fitting for a very activistic era.

Politics aside this is also a very engaging movie to watch. Drama and violence is lurking under the surface constantly and Clint Eastwood is superb in his typecast role of quiet avenger. This is Clint Eastwood exactly like we expect him to be. As violent as it is, this is also a movie I very much enjoyed watching. Guilty pleasure, I suppose, but this really is a different western.

A recommendation for fans of Clint Eastwood and those who like a bit of Bunuel in their movies.