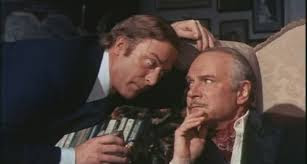 One of the big names from the classic era of Hollywood was Joseph L.Mankiewicz. As screenwriter, producer and director he was involved in an insane number of movies including such celebrated movies “The Philadelphia Story”, “All about Eve”, “Guys and Dolls” and “The Sound of Music”. Right now there is a movie, “Mank” of Netflix about his brother Herman Mankiewicz who wrote "Citizen Kane".

His last movie was “Sleuth” and it is sort of fitting that it features both the glorious past (Laurence Olivier) and the future (Michael Caine) in a game of outwitting each other.

Tindle has been invited by Wyke to his mansion. Tindle is seeing Wyke’s wife, Margueritte, and Wyke is seeing another girl, Tea, and now Wyke has a proposition to make Tindle. Rob his jewelry, sell it to a fence and Wyke can get the insurance money and all are happy. Sounds… reasonable enough, we are talking 250.000£, but Wyke is so obsessed with games and plots that he ends up having Tindle dressed up as a clown in the most ludicrous burglary attempt ever. At this point I was finding this charade both boring and confusing, where on earth was this going?

Then Wyke draws a gun and it turns out that this was all a plot to get Tindle into a situation where Wyke could shoot him. Apparently, sleeping with his wife is not something he takes so lightly after all. This made me sit up in my seat, I did not see that coming (sorry for spoiling the movie), and suddenly the movie turned a lot more interesting.

Having killed Tindle, Wyke is enjoying himself until a police detective, apparently straight out of Wyke’s detective stories, shows up and makes inquires about the missing Tindle. Wyke denies everything, but inspector Doppler is incredibly sharp and have soon Wyke cornered. Only, Doppler is actually Tindle in disguise. 1 -1.

The third game is also Tindle’s . He claims to have killed Tea, Wyke’s girlfriend, and framed Wyke for it. Wyke is now caught in the same sort of games he was playing on Tindle.

This is an extensive game of one-upmanship, but with a very bloody slant. The games get meaner and meaner and it is all about humiliating the counterpart.

Had this been lesser actors or a less skillful director, this could easily have become dull and dumb. There are plenty of movies out there with doucebags running scams on each other and they are not always good. But this is Laurence Olivier and Michael Caine in top shape and they manage to keep the steam up over the two and a half hours of running time. Especially Olivier is amazing, and it is very clear that as a stage actor he feels entirely at home in this sort of wordy, filmed theater. Caine is not bad either, though it takes some time before he rolls out his guns and are able to play up to Olivier.

Joseph L. Mankiewicz ended on a high. “Sleuth” made four Academy nomination, including best actor nomination to both Olivier and Caine, but in a strong year fell short of winning any. That is still pretty well done for filmed theater.

A recommendation from me. It has to be.