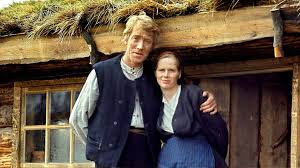 “The New Land” (“Nybyggarna”) follows on the heels of “The Emigrants” (“Utvandrarna”) and combines to make my second Off-list entry of 1972. At a combined six hour running time, this is quite a mouthful but despite the slow pace, absolutely worth it. I think I mentioned that when I reviewed the first part…

Where “The Emigrants” had a clear and obvious story arc, which was that of a journey: Starting out, the voyage and arriving, “The New Land” is more like a string of minor (and some rather major) events in a “what happened afterwards” sequence. This was how the books were written and there is an obvious desire here to follow the books as closely as possible. That is an admirable sentiment, but also a trap because converted to a movie all these events appear abbreviated and tableaux-like. The movie loses its dynamic drive and becomes more of a dutiful summary of events than something that can engage the viewer.

For this reason, “The New Land” is clearly the weaker of the two movies.

Karl-Oskar (Max von Sydow) and Kristina (Liv Ullmann) has arrived in Minnesota with their family and friends and now begins the hard life as pioneering settlers on the frontier. It is a do-or-die phase and while Karl Oskar persevere through hard work and a frugal lifestyle, some of his fellows do not. This is literally survival of the fittest and in this respect, Karl Oskar got a very appropriate schooling with him from farming in Småland. It is harder for Kristina. She suffers badly from homesickness and hangs on tightly to her roots. Still in the larger picture, she is also a survivor.

Robert (Eddie Axberg), Karl Oskar’s brother is less fortunate. He keeps dreaming of that windfall he is certain to find in America and now he imagines it is waiting for him in California. He convinces the simple Arvid (Pierre Lindstedt) to go with him, but the voyage is anything but easy. To pay for their way they have to take the lousiest and dirtiest jobs and as opposed to Karl Oskar, Robert is hopelessly unequipped for his challenges. Robert watches his friend die and his hopes come to nothing. Even when he thinks he has made something out of himself it turns out to be worthless.

While the story of Karl Oskar and Kristina is comforting and optimistic as they slowly build a solid life for themselves, their problems often seem trivial. To be able to pay to receive a letter, new neighbors who insist on religious zeal and which outbuilding to build next. In a personal life these are all major items, but outside the comfort for us outsiders there is hardly enough to drive the story. The story of Robert, as tragic as it is, holds a lot more drama and crisis and is the most interesting part of the story. In a Hollywood version all his hardships would find some sort of reward at the end, but this is not that kind of story. Here Robert’s story is merely a counterpoint to Karl Oskar’s and in reality, the solid farmer does better than the flaky dreamer.

The main reason why I enjoyed “The New Land” despite these issues, is the almost ethnographic precision there is to this tale. There is a documentary element that insists on telling the tale of these settlers as honest and truthful as possible so for a history buff like me this is a treasure throve. It is interesting to see this community gradually becoming American, in language and sentiment, and how the region is changing from frontier to settled over a few decades.

And then of course we invest so much in Karl Oscar and Kristina that it is interesting simply to follow their lives.

Based on the summary on Wikipedia I suspect that my version was cut short in the end. We learn very little about what happens to Karl Oskar and Kristina’s children and while I understand that the movie was already long and drawing to a close, I would have preferred this to the dreadful scene of the dead baby.

“The New Land” is the lesser half of the two, but necessary to complete the story and therefore must be recommended.