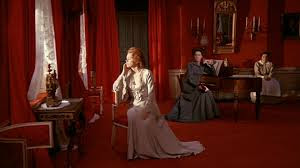 Once again, I am in that annoying place where a movie is making me feel stupid.

“Cries and Whispers” (“Viskningar och rop”) is yet another movie by Ingmar Bergman and this time he has made an effort to make it really opaque. Normally his movies are about the absence of God, but not this time (I think). This time I have found no simple key to understand it.

In a Swedish manor, sometime in the late 19th century, a woman is sick. Her name is Agnes (Harriet Anderson) and she is confined to her bed. Around her are three women looking out for her these last few days. The movie takes turns focusing on each of them.

Agnes was envious on Maria (Liv Ullmann), her sister, who always got their mother’s attention while Agnes was the outside child.

Maria is the pretty one. She is having an affair with the doctor, which makes her husband stab himself. She also really likes to touch people.

Karin (Ingrid Thulin) is the repressed sister. She lives in a loveless marriage and tries herself to be tight and cold, but her bitterness and frustrations spill over and she seems to get some release from cutting her own genitals and smearing the blood in her face.

Anna (Kari Sylwan), the maid, actually cares about Agnes, maybe the only one who does. She will on two occasions sit with Agnes head on her naked breast like a mother with a child. She also has a macabre vision of Agnes talking from the dead. Anna is quickly dismissed by the sisters after the funeral.

Everything is red, very red, except some of the dresses which are white or black. But otherwise, everything is saturated in red, even the fadeouts. Something about that Bergman thought that was the color of the soul. Speaking of which, this is all some vision Bergman had, about some women in red rooms, and as far as I can tell that is the deeper idea of this.

I tried to read up on “Cries and Whispers”, Wikipedia has a lengthy article about it, but I did not get much smarter, which bothers me. I can usually work out what Bergman wanted to say with his movies, but in his later films this point is getting deeper and deeper buried. It is something about female psyche, maybe an Orpheus (?) story, the women are different aspects of Bergman’s mother, things like that. My own analysis is that they are all flawed women who are caught in their own misery and have to live with that (or die). That is pretty weak, and I am not very happy with that analysis.

I would like to say that it is a pretty movie and clever and all, but without a key to watch it, it very easily becomes a series of random pictures. Also, I found it distracting to look at Liv Ullmann. To me she is Kristina in the “The Emigrants”, a character who is infinitely different from Maria, but, obviously, with the same face. Also, Henning Moritzen was an odd and distracting casting for Maria’s husband.

The critics were ecstatic about “Cries and Whispers” and the term masterpiece gets thrown around quite a bit. I think they got more out of it than I did. So, I think this is mostly recommended for Bergman afficionados and critics. And those who really like red.