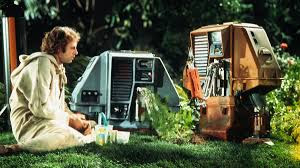 The third (or fourth) off-List movie for 1972 is “Silent Running”, a movie that in many respects have been flying under the radar, but which has a premise which is just too interesting to miss.

Some time in the future nature has apparently become so scarce that the various biomes of Earth are preserved under dome on spaceships out around Saturn. Yup, that sounds pretty bad. One of these is the Valley-Forge, crewed by four humans and three drones. The humans are Lowell (Bruce Dern), an avid gardener who is thriving in the biomes, and Keenan (Cliff Potts), Barker (Ron Rifkin) and Wolf (Jesse Vint) for whom taking care of the ship is just another boring job. When, finally, the call come in to terminate the mission it is not in order to bring nature back to Earth, but literally to terminate the biomes, separate them from the ships and blow them up.

Barker, Keenan and Wolf are delighted and start blowing up the domes with gusto, while Lowell is despairing. He kills one of the guys, fighting over a shovel, and sends the other two out with one of the exploding domes. Alone with the drones he escapes with the Valley-Forge and drifts around in deep space.

I watched some of this years ago, enough to recall the drones, charming little fellows and likely the model for the drones in Star Wars, but nothing of the actual plot. In that sense, this was a new movie to me. At first impression this seems to be an environmentalist movie about saving and protecting nature as something precious and something which cannot be restored once lost. The thought that you have to preserve it, not just in space, but as far out as around Saturn would make the situation on Earth very bad indeed and with this effort to preserve it, the order to destroy the domes that much more incredulous. I honestly thought that this criminal order would be the centerpiece of the movie, that it would have been exposed as false or an evil act the protagonists are up against, but therein I was disappointed. We never learn why this order was given and there is no remorse. It is just something that happens, like a budget cut and that is it. That, of course may be a point in itself. An uncaring human race will just throw this away with the same neglect as it ruined the Earth.

Throwing me a bit, it helped me focus on what seems to be the real story here, which is the personal story of Lowell. In order to save what he loved he committed the crime of killing people and now have to live with the consequences. He is alone with his consciousness, with the drones as his only company, but sweet as they are, they are not people and projecting human characters onto them does not change that. In the end Lowell must cave in and face the music.

Maybe it is an expression of how much bigger the ecological agenda has become in an age of global warning or maybe it is just me who like the science fiction element better, but I feel this was a case of giving up the interesting story to a trivial story. Or maybe it is just not interesting enough having Lowell float around in space, taking care of his garden and the audience had to have the personal story. Anyway, I cannot shake the sense of lost opportunity here,

Having said that, there is still a lot to enjoy about “Silent Running”. The spaceship design is pretty cool with that clunky seventies technology and the domed gardens was a very nice touch. The drones too are very charming. From an age before CGI there are real midget actors inside, helping for give them an anthropomorphic touch and solidity that CGI robots lack. You also get a lot of that claustrophobic loneliness that only a spaceship can provide.

I would love to call this an environmentalist science fiction movie, but it only goes part way there and is mostly a moral tale that man cannot make it alone and has to face up to his crimes even when committed for something he loves. That may be enough, but I wanted more.