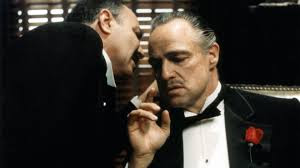 Okay, here is an embarrassing confession: I never watched “The Godfather” before now. Given the reputation of this movie I understand this is a shocking confession, but there you go. The reason is that the subject matter, the Mafia, never interested me much and so, whenever the movie was brought up, I skipped.

Now I have remedied that fault. Plus, I got something that most people have not had in year: The chance to experience “The Godfather” for the first time and with very little prior knowledge. That is a nice bonus.

“The Godfather” has a huge reputation. It won Best Picture for the year and was the highest grossing movie ever, at the time. Characters and quotes from it have entered not just pop-culture but regular vocabulary. The “We will make him an offer he cannot refuse” quote has that sinister ring because of this movie. Some are likely to call this the best movie ever made. I would not go anywhere that far, but I freely admit that this is a captivating story and a movie with a very high production value.

The Corleone family is headed by Vito Corleone (Marlon Brando), also known as Don Corleone. The Corleone is a regular mafia family who in 1945 do old school mafia stuff such as gambling, booze, prostitution and general manipulation of politicians, judges and media for friends and family. As the “Don”, Vito Corleone is father, CEO and king in one person. There is no distinction between family and business affairs, it is all tied together, and being an employee is essentially to be part of the family. Very Sicilian.

At the start of the movie Michael Corleone (Al Pacino) has returned from the war as a war hero. He has a girlfriend, Kay (Diane Keaton) from outside the mafia world and is considered outside the family business, both by the family and by himself. This changes when Vito is attempted murdered for refusing to go into drugs. It drags Michael into the mafia and it is soon clear that he is the only one of Vito’s sons who has the talent to inherit the family business.

The movie charts Michaels passage from outsider to become “Don” himself and the kind of personal changes that leads him there. This is “The Giant” in New York, the evolution of a family empire, but also, and much more so, the personal evolution of Michael. He is formed by the killing of his first wife and his brother and the siege mentality of having the entire world ganging up against the family. He goes into this with ideals and principles that belong to the outside world, but gradually these are replaced by the values of the family. It is tragic, but fascinating to watch and it made Al Pacino a star.

“The Godfather” is a long movie and clocks in at 3 hours, but it has to be so to cover the ground needed. It must have an epic format and there has to be a slow melancholy to the movie, a sense of innocence lost, magnificently underscored by Nino Rota’s haunting tune made famous by the movie. The camera dwells for a while, the pace is low, and then it explodes. It is a perfect balance between giving the right ambience and driving the plot forward in a way that 3 hours does not seem like a long time.

I also have to commend the producers for the authenticity of the fabric of the movie. Actors with Italian background were picked, even down to minor roles and they occasionally switch to Italian. Cars, cloths, hairstyles all reflect the periods and the settings perfectly. It feels so real through and through. The only one not Italian was Marlon Brando, but he compensated by giving the performance of his career. This is what a mafia Don looks and sounds like today.

I can of course only recommend “The Godfather”. It is a much better movie than I thought in all my years of avoiding it. I have not suddenly turned into a mafia movie afficionado, it is just that this movie is so much more.

Fun fact: Corleone is a real place on Sicily. A colleague of mine did a wind farm there a few years ago.