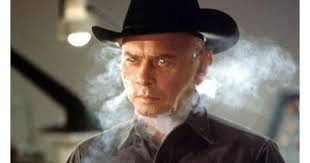 My history with “Westworld” goes way back. I watched it, or at least some of it in my early childhood and it scared or disturbed me so badly that I never went back. Even in adult life I have had the idea that this was an uncomfortable movie and so I have not even watched the HBO reboot of it.

Yet, this is the first of my off-List movies of 1973 and I am very happy that I faced my demons because, lo and behold, this is an excellent movie and truly one I should have been watching several times over the years.

“Westworld” takes place in a not-too-distant future where a company called Delos has created the ultimate theme park. They have recreated three historical settings, the Roman world, the medieval world and the old West, and submerge the guests into them as if they were living in that setting. Sort of time travel as a holiday resort or ultimate roleplaying. To bring these worlds alive Delos has populated them with very lifelike robots. They are almost indistinguishable from humans and are so complicated that they needed computers to create them (meaning that no human fully understand how they work).

This theme park has become incredibly popular with affluent adults and we are following two of these guests on their visit to Westworld: Peter Martin (Richard Benjamin) and John Blane (James Brolin). Everything is awesome as they suspend themselves into this reconstructed historic world. They get to experience all the Western tropes: lusty barmaids, saloon fights, escape from prison with dynamite and gunfights. The gunfight in particular is convincing. A particular robot, labelled Gunslinger (Yul Brynner) is specialized in provoking duels and Peter Martin gets to shoot him twice. It is perfectly safe, the robots are programmed not to harm humans.

Except, something is happening to them. They are starting to deviate from their programming and become more… human. A concern is slowly becoming a worry, but before the operating staff can do anything about it the robots are in open rebellion. We see how in both the Roman and Medieval world the guests are being butchered and now the Gunslinger means business and duels become deadly. Will any guest get out of this alive?

Michael Crichton was a very well-known author, most famously the writer of “Jurassic Park”. What I did not know is that he also directed a number of his stories and “Westworld” was his directorial debut. There are in fact a lot of parallels to “Jurrasic Park”, but also “Bladerunner” and “The Terminator” reference back to Westworld and they are not Crichton stories.

Clearly Crichton was interested in technology getting out of control. In “Westworld” Delos thought they could control robots, in “Jurassic Park” it was dinosaurs. The creatures evolve and what was supposed to be safe becomes very dangerous. As in “Bladerunner” (or “Does Androids Dream of Electrical Sheep?”) the boundary between robots and humans get blurry and the robots start challenging their makers. There is a very philosophical angle to this movie and I got the impression that the HBO reboot spends a lot of energy on this question.

But this is also an action movie. Once the robots take control of their own “lives”, Westworld becomes a very dangerous place to be. There is a chase with the gunslinger that was definitely the inspiration for The Terminator chase in the movie of that name. The end scene is almost a clone.

It is a movie that keeps a good pace and it never grows boring, but the most amazing thing is how modern it all looks. There is nothing clunky about these robots. There are even very early computer graphics (the pixelated vision of the Gunslinger). Sure, the computers running the theme park are big industrial things, but not distractingly so. But most of all the ending feels very modern. Our hero may have gotten a respite, but he is not out of the woods and it is a very uncertain future he is looking into.

I very much enjoyed watching “Westworld”, it is one of the best movies I have watched lately and the production value is top notch. In an age where the discussion of AI’s has returned, this is a movie that is surprisingly relevant even today.