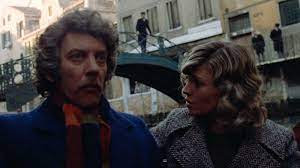 Nicolas Roeg is not your average director and “Don’t Look Now” is not your average movie. For one, it has the most horrific opening of any movie I can recall. Parents finding their little daughter downed in a pond. In writing this is sort of flat, but in the naturalistic presentation of Roeg, this is completely devastating and had this not been a List movie I would have stopped there and then. This is a parent’s worst nightmare and I feel sick just thinking of that scene.

How do you move on from something like that?

Laura (Julie Christie) and John Baxter (Donald Sutherland) go to Venice to work it off. John is a specialist restoring old buildings and got a job fixing an old church. This is not your typical Venice scene though. It is winter and Venice is grey and moldy and largely empty and thus a mirror on Laura and John.

Then Laura meets two old British women, one of which, Heather (Hilary Mason), claims to be psychic and that she has seen Laura’s daughter, Christine, and that she is happy. Shocked at first, this does inject new life into Laura who starts obsessing about this. John, on the other hand is sceptic until he also gets signs that something weird is going on.

And there we are, a ghost story in Venice… maybe.

Because it is very difficult to work out what is actually going on. Or more importantly, why? “Don’t Look Now” takes us on a dizzying trip through Venice where the border between reality and the supernatural becomes blurred. John is getting increasingly confused, seeing his wife where she is not supposed to be, seeing what could be his daughter in the alleys and have a close call with death when the scaffolding crash in the church.

Nicolas Roeg populated this story with strange characters, symbols and motifs, which all seem foreboding. It is creepy more than it is horrific and rather confusing too. Nothing is entirely what it seems, but we rarely learn what it really is.

I am having some trouble deciphering “Don’t look now” and is mostly left with it’s themes of death, decay and doom. John has some prescience, but it never helps him. Instead, he is tied to downward spiral. Much more I cannot glean from this. I was expecting some sort of closure or catharsis at the end, but got no such thing. This is just not that kind of movie.

That does not mean that this is a poor movie, not at all. It totally works at making you uneasy. The sense of doom is subtle enough that you rarely see it outright, but it is there, just beneath the surface. Whether it is the grey and creepy alleys or the strange policeman. Echoes between houses or the dark water in the canal.

Roeg uses flashbacks and visions in glimpses to let us into the heads on Laura and particularly John. This is part of the dizzying effect, but also let us share their emotions, which is crucial in this move.

And then we are invited into their bedroom, like for real. Not sure I really needed that.

“Don’t Look Know” is one of those movies I probably need to watch a few times. At this point I find it intriguing and disturbing as if I have only scraped the surface, but not disappointed as I sometimes are when I am being left confused at the end of the movie.

Probably a recommendation, if you can get past that first scene.