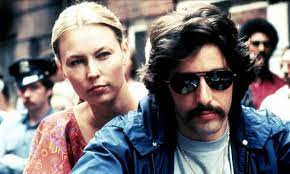 Watching “Serpico” made me think about all these movies based on real events. Where is the line between a documentary and a fictionalized version of a story? How close must fiction be to reality to claim semblance with real event, or rather, how much freedom is allowed for dramatic effect?

It is an old story and I believe I had the same discussion back with “Nanook” and it is still relevant. Hollywood loves to add “Based on real events” on the titles if it can get away with it and ever so often it annoys me that interesting events apparently are not interesting enough and so requires a boost. It bothers my purist soul, yet those movies never claimed to be documentaries, so why not? Most fiction is exactly that, made up stories.

“Serpico” is one of those “based on real events” movies that took a historic core story and boosted it for dramatic effect, causing everybody and their mother who had anything to do with the real events to disown it, yet became a big hit, both at the box office and with the critics. The real Frank Serpico apparently walked out of the screening and only watched the movie in its entirety decades later. Not to mention the reaction from the NYPD.

In the movie we follow the career of Serpico (Al Pacino) from graduation as police officer and through the various departments through which he passed. We know it will end badly because the first thing we see, is him being brough in with a gunshot to his face, so every step seems like one step closer to doom. When he becomes a plain cloth cop, he finds himself among policemen who pick up money for looking the other way and Serpico gets confused and upset and uncertain what to do. Asking upstairs does not seem to make a difference, these things apparently happen with approval from the superiors. Instead Serpico is left hanging with few friends and in increasingly dangerous straits as the corruption seems to take on larger form around him, indicative of systemic rot.

Serpico’s private life falls to pieces and when he ends up going to the press instead, he is placed in the most dangerous unit where he soon becomes a victim of the “accidents” that happen. The gunshot wound we see in the opening.

There is no doubt this is a dramatic story being told and it is being expertly told, both through direction and acting. Pacino literally adopted the character of Frank Serpico and it earned him a deserved Academy nomination. This is a good movie.

Yet, and this is my point, the link to real events comes with obligations and responsibilities that are too easily sacrificed. I have of course no idea what really happened to Serpico, so I can only assume that the story is as told in the movie and I believe I share that with the large majority of viewers, so, although we intellectually know this is fictionalized, on a more primal level we believe this is the true story. Among the victims in that process are all the honest cops there may have been when this movie clearly implies that the entire force was rotten to the core. Add to that that these events, resulting in the Knapp commission, were historical events that are now by the public understood as presented by the movie. Then historians can scream and shout all they want, the public story will not change.

Okay, I know I may be going overboard on this and Serpico is not the worst, not by a long shot, when it comes to a relaxed attitude toward the real events, but it triggered this uneasiness in me and I had to let it out.

So, what is a good fictionalization? I would say the golden standard for me is the Chernobyl mini-series. It is not a documentary, shortcuts were made, the dialogue is largely invented and an entire team of scientists was cooked down to a single person, but in everything that matters, this is how it took place. Reality is plenty dramatic on its own.

I am sorry I did not say that much of “Serpico” itself. I did like the movie, and it is a recommendation from me. Even Frank Serpico himself eventually came to terms with it.  Or that is what I hear.