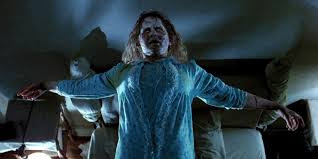 Horror movies are not really my thing, mostly because I scare so easily. My wife loves horror movies and she usually have to work hard to convince me to watch them with her. I have known for a while that “The Exorcist” would be coming up and dreaded it. “The Exorcist” has quite a reputation and it is one I have known of since childhood and consistently avoided watching since. I remember reading stories about it (and “Poltergeist”) that completely freaked me out, so, well, this would be one of the hard ones to get under the belt.

To my surprise and great relief “The Exorcist” was a far better movie and much less scary than anticipated. This may be a function of three things, the aging (we have become a lot more jaded), the familiarity with the story (even I knew what was going to happen and the Book text on “The Exorcist” is essentially one big spoiler) and it is thin on jump-scares, which is what usually sends me up under the roof. It also spends a lot more time on telling the story and building up the characters than I expect from a horror movie and that adds layers of depth I did not expect to find here.

The opening of “The Exorcist” makes very little sense until near the end of the movie. We see an elderly archeologist (Max von Sydow) on a dig in Iraq finding a small figurine of a demon. This tells us very little except that Max von Sydow also looked old nearly fifty years ago.

Cut to Washington DC where Chris MacNeil (Ellen Burstyn) is an actor on a set. She lives for the time being near Georgetown University, which is run by Jesuits, together with her 12-year-old daughter Regan (Linda Blair) and some domestics. Chris is evidently a quite successful actress. Almost imperceptibly Regan is showing signs that something wrong happening to her. She starts cursing and claims her bed is shaking and when consulted, the doctors put it off as pre-teen nerves. As her condition worsen, the medical examinations get increasingly invasive and the doctors’ theories thinner.

Meanwhile we are introduced to Father Karras (Jason Miller), a Jesuit trained as psychiatrist. He is undergoing doubts concerning his faith and the pressure he is under, and this gets particularly bad when his elderly mother dies. I did not exactly understand how he is Greek, but belongs to the Catholic faith, but, whatever. He is not in a good place when Chris, running out of options, turns to him. At first, he is in line with the row of doctors already consulted, but Regan is at this time so utterly transformed that this cannot be rejected as mental illness.

Karras allies with Merrin, our archeologist from the beginning, who apparently is an expert on demons, and so embark on an exorcism.

There is so much build up here that I almost forgot this was supposed to be a horror movie and the filming is done in this very seventies, naturalistic style that seem, to tell us that of course supernatural things do not happen in this world. This also mean we are eased into Regan’s condition. Sure, it is freaky and horrendous, but somehow more interesting than actually scary. I found myself drawn into the story rather than repelled. I felt the anguish of the mother and pity for the little girl and that is to me a lot more valuable than jump scares.

Without the build up we would not understand Karras choices in the climactic scenes and I doubt we would understand the demonic transformation of Regan’s character nearly as well. Also, the story throws in a number of minor characters like the policeman Kinderman (Lee J. Cobb), the film director Burke Dennings or the Swiss chauffeur and butler, Karl. They all have some story arcs, which may not be critical to the larger story and in a tighter cut they might have been lost, but they add depth to the story and makes it more than just a horror movie.

Oh, and I should not forget to mention the super impressive special effect work on the demonic battles. There you easily forget this is 1973.

I did not expect to say this, but I do recommend “The Exorcist”. Maybe not for children, but certainly for horror sceptics like myself.

For true horror I can refer to the game yesterday between Denmark and Finland when Christian Eriksen suffered cardiac arrest on the field. That was terrifying.