The Spirit of the Beehive (El Espirito de la Colmena) (1973) 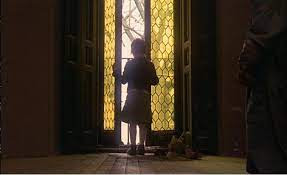 “The Spirit of the Beehive” (“El Espiritu de la colmena) is a Spanish movie from the last years of the Franco era. For those not so well acquainted with Spanish history (which includes me), the Fascists, led by Franco, won the Spanish civil war in the late thirties and remained in power until around 1975, being at that time an odd leftover in Europe, but accepted because of their strong anti-communist stance. The enemy of my enemy is my friend, sort of thing.

And what has all this to do with this movie? Well, apparently nothing at all (or everything). This is a very (very!) slow movie about a family in a small village on the Castilian plain in 1940. They live in a manor house, hinting at former wealth, the father raises bees, the, much younger, mother spends her time writing letters to an old lover and the two young girls, Ana (Ana Torrent) and her slightly older sister, Isabel (Isabel Telleria) spends their time as children do, go to school, play and tease each other, mostly Isabel fooling the gullible Ana.

The family life is very quiet. The do not talk much and spend most of their time alone, making the big house feel empty. Ana is our focal point. It is through her we see the world. Her youth makes her very impressionable and a showing of “Frankenstein” by a travelling cinema makes a big impact on her. Why did the monster throw the girl into the water and why did they kill the monster? Isabel tells her that Frankenstein is a spirit and that he lives in an old animal shed on the barren fields. Ana is spellbound by this story and checks out the shed regularly until one day she finds a wounded Republican soldier there. She sees him as the Frankenstein spirit and brings him food and cloth. Shortly after the soldier is caught and shot and when Ana finds out she is devastated and runs away. The experience seems to drive a wedge between her and her family.

This is a seriously slow movie, but also a movie with an ambience that drew me in, as if it does not matter that not much is happening, you feel the movie. Mostly it is that persisting loneliness, a quiet that lays like a duvet across the family, the village and the empty, desolate land around the village. It is a world cut off from the rest of the world with a mourning lethargy to it.

The apparent story of the little girl looking for and finding her Frankenstein spirit is dreamy and sweet and because of its execution actually enough despite being so thin.

Like many movies made under the watchful eyes of authoritarian censors, it is also full of symbols referring to Spain in the early years of the Franco rule. I have only spotted a few of these, like the most obvious ones. 1940 is the first year after the end of the war and Spain is in complete isolation. The mourning is of the violation of the country, something has been torn out from it. The beehive is the totalitarian state where everybody has a fixed role. The spirit is a soul of the country, killed by the Facists and so one. Readers of symbols can get a lot out of this movie.

Compared to Bunuel, the critique of Victor Erice, the director, is more quiet and subtle. It is one of sadness rather than flippant and touches something deep. You get the feeling even if you do not get the reason and it feels clever without being smart.

Apparently, the Franco regime allowed this movie partly because of the international acclaim, at this point they were eager for international recognition and acceptance, and partly because they figured nobody would care about a very slow movie that would be difficult to understand and so it found its way to the public. Whether the public actually embraced it I do not know. I guess the Franco regime figured that a small group of intellectuals was no threat to them.

I liked this movie a lot more than I expected. I even embraced its slowness and just enjoyed being sucked in. It also left me feeling incredibly sad, but that is the purpose of art, no? To move you. Highly recommended.