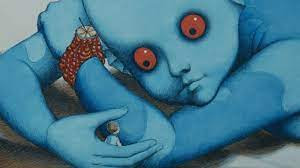 Well, that was an… ahem… weird experience.

Once upon a time in a galaxy very far away from Disneyland, reigned the Traags. They were a race of blue giants with red eyes who considered themselves very highly evolved and spent much of their time meditating so their spirits could go to the planet’s moon to merge with some statues and propagate the species.

Beneath the giant Traag lived the tiny, humanlike Om. They were treated like vermin by the Traag. Sometimes they kept them as pets, sometimes they sent out the pest control units to keep the nuisance down, but mostly they did not care. Meanwhile the Oms lived a precarious, hunter-gatherer life beset on all sides by dangers.

We follow an Om, whose mother is killed by playing Traag children. He is taken as a pet by the Traag child Tiwa and named Terr. Terr is never considered more than a hamster by Tiwa and is subjected to all sorts of humiliations as he grows up. Unknown to Tiwa, Terr has gained access to a Traag learning device and one day Terr runs away with the device.

The wild Oms are not less barbaric than the Traag, but with access to knowledge, times may change…

This may be a classic story about oppression, rebellion and freedom but the wrapping is anything but classic. As a cartoon this is highly experimental on every level. The animation and the dialogue, but particularly in the design. This is supposed to take place on an alien planet and by Jupiter, this planet is alien! Plants, animals, concepts, technology. The propagation cycle of the Traag is downright bizarre. The only thing recognizable is the Om, who are described and drawn very much as humans, so familiar that you have to wonder how we ended up on that planet.

The very alien design of course has as purpose to camouflage the underlying story. “Fantastic Planet” came out of Czechoslovakia (with some French help) at a time when the communist party was busy ensuring there would not be a repeat of the Spring in Prague, so a story about big, bad guys treating people like vermin had to be well camouflaged.

In fact, “Fantastic Planet” has been touted as allegorical on every level, connecting it with racism, animal rights and any struggle for freedom or independence imaginable (Wikipedia).

The end result, when a movie is busy being allegorical, is that the story is at times forced, but that is a minor thing. The lasting impression is how completely trippy the design is and as a consequence how incomprehensible much of the action and dialogue is at surface value. This is definitely not a movie to show your children, it will scare them first and then bore them to death.

For myself, I did enjoy watching “Fantastic Planet”, mostly because of the weird experience it was. You just never saw anything like this before and probably never will.