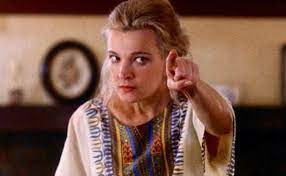 I am no expert on mental illnesses. I think it is scary what illnesses in the brain can do to you and I am quite certain I would not be good at handling a person with such an illness. Yet, this is exactly what Cassavetes’ “A Woman Under the Influence” invites us to do. For two and a half hours we get to live with the Longhettis.

Mabel (Gena Rowlands) is suffering from some illness, though I am in no position to tell what it is. There is some indication she is bipolar, but I could be very wrong. She seems very nervous and slips into a fantasy world where she will act strangely hyped and say and do odd things. The last thing Mabel needs is someone too stupid, selfish or hot tempered to deal with her illness, but that is exactly what her husband Nick (Peter Falk) is. Shouting and bullying is his way of handling things, force them into submission and show who is the boss. He is the kind of guy who will shout at people to have fun and if they do not, a slap may help them on their way.

Frankly, if I was in Mabel’s shoes I would also want to retire into my own little world where Nick could not reach me and that makes me wonder how big a hand he may have in her illness.

Plotwise, it is not as if a lot is happening over the course of the movie. Mabel is slowly getting worse and in a scene with a particularly lot of shouting, Mabel gets hospitalized. Half a year later she comes back, but her welcome home party disintegrate when Nick starts shouting and Mabel suffers a relapse.

It is clear to me that Mabel is very much alone. People see her as an ill and potentially dangerous person, and she has nobody to rely on. In a crucial scene near the end, she asks her father if he will not stand up for her, but he deliberately misunderstands her instead of coming to her help. And Nick, man, he may mean well, but he is downright abusive. Again, near the end, when Mabel is feeling most vulnerable, she asks him if he loves her, and he cannot commit. He simply has no idea what she needs. In his eye, she just needs to be normal, dammit, and it probably works better if he shouts it.

As such, this is a painful movie to watch. There is no doubt that both Rowlands and Falk act their asses out of their pants (an expression that works better in Danish…) and it feels very real, but it is not enjoyable to watch. Like a train wreck in slow motion. I cannot help thinking of the children who must grow up scarred for life and I get so upset watching Nick and both set of parents.

Does that make it a good movie or a terrible movie? I guess it depends on which standard you use. It feels important and it makes you question things in yourself, though it might be difficult to handle this any worse than Nick does. Would I want to watch it again? Well, I do not think I would do that to myself. Once is plenty enough.

Wikipedia writes that it was difficult to sell the movie. Cassavetes was told that “No one wants to see a crazy, middle-aged dame”. I think the real question is, who wants to see an insane middle-aged man go crazy on his mentally ill wife? It is spectacular, maybe even important, but also very, very painful.