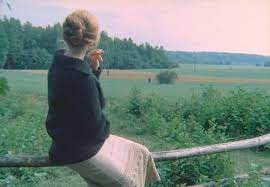 This is, once again, one of those situations where I feel like a plebeian idiot. I am so confused having watched “Mirror” and I have very little idea what it is I have just been watching. There was some extra material to the movie including a scholar analyzing the movie and I got just as little from that. Clearly, I am an idiot and not at all the target audience.

What is going on here? Well, the structure of the movie is a stream of consciousness rather than a plot. In fact, there is no plot as far as I can tell. We get a number of settings spread out in time and often we are reverting to those settings. Some are fairly easy to place, there is something in the thirties or forties taking place in rural Russia and some “modern” (1970’ies) scenes, presumably in Moscow. Some scenes are dream sequences identified as such by being in black and white and some scenes I just cannot place: dream or reality? Present or past? It is not helping that the same actors seem to have multiple roles and there is a strange blur in time.

I also got that Tarkovsky plays a significant role in the movie. Sometimes we see things from his point of view as if all this is taking place in the mind of Tarkovsky himself. Following that thought, the child in the “past” sequences is likely himself and the woman his mother, who incidentally is also his wife in present time. There is also a boy, Ignat, in the present scenes with an uncertain function.

Another dominant feature is the pervading sense of gloom. The score is beautiful and range from funeral music to grand, melancholic drama, always with a slant of sadness. It is the most accessible element of the movie and the one thing I liked about it. Whether it is a personal doom, a memory of loss or something larger I do not know, but if this is somehow meant to describe Russia, I am starting to understand why they need a lot of vodka.

This is as much as I can describe this movie. As I have already indicated I have no idea what is going on, so I suspect that it is a movie that require an analysis, to have a key to unlock it. That is sometimes fun, but in this case it is as if the movie is trying to avoid my attention. I am constantly drawn away rather than into the movie. I am simply not interested enough to make that extra effort to understand it and as a result it becomes just random, incoherent pictures.

And that places me in the group on plebeian idiots and not among movie scholars. “Sight and Sound” rank it as the 9th greatest movie of all time, and it has a 9.2 score on Rotten Tomatoes. Apparently, this is a really great movie. Well, maybe I like my movies just a tad more accessible.