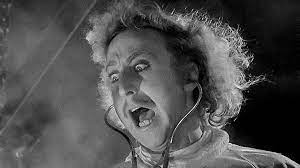 I was certain I had seen “Young Frankenstein” before, it is a title I am very familiar with, but I quickly realized that I must have mixed it up with something else and instead this became an unexpected first view for me. I cannot complain, this was a lot better than I thought it would be.

“Young Frankenstein” is a Mel Brooks comedy and for better or worse, his trademark is silly jokes. Especially in his later movies there is an infantile streak that, well, makes it a Mel Brooks movie. “Young Frankenstein” is funny and silly, but it is also something more. There is a heart in it. A love for the old Frankenstein movies by James Whale and a restraint from going totally overboard. An explanation was offered when I discovered that the original idea was Gene Wilder’s and that he co-authored the screenplay. This movie is, simply put, more than a Mel Brooks comedy.

Dr. Frederick Frankenstein (Gene Wilder) is teaching medicine in America. Sober and scientific medicine, not the mumbo-jumbo of his infamous grandfather. When he inherits the old family castle, he travels to Transylvania (inexplicably misplaced in Germany…) to check it out. He is met by Igor (Marty Feldman), an assistant, Inga (Teri Garr) and the housekeeper, Frau Blücher (Cloris Leachman) and together they set out to create their own monster (Peter Boyle).

Everything in this movie is made with an eye to “Frankenstein” and “Bride of Frankenstein”, whether it is the black and white cinematography, the gothic laboratory (the original set from the thirties!) or the various scenes. We get the brain mix-up, the life-by-electrocution scene, the little girl with the flowers and the blind hermit. Even Elsa Lancaster’s hairdo is recreated with the white stripes. But where the original was having religious elements such as a human as the Creator, “Young Frankenstein” largely replaces that, rather serious, element with a lighter father-son theme, about acceptance of the father role.

Most of all though, it is a comedy. Igor has fantastic bug-eyes and frequently breaks the fourth wall with Monty Pythonic comedy. Garr as Inga is a revelation in comedic timing, often stealing the scenes and Wilder himself does the Gene Wilder thing, but more controlled than how he usually appear. It would have been easy to take him totally overboard, but he actually stays believable throughout. Amazingly enough.

In the extra material it was explained that every comedic stunt in the movie has a straight guy, though the role of straight guy may change mid-scene, and that is why the jokes usually work. If Feldman is funny, Wilder is straight. If Wilder is funny then Garr is straight, but suddenly they reverse and so on. Sounds simple, but I believe that is the successful recipe.

The only time they cross the line and take the silliness too far is when Wilder and Boyle, as Frankenstein and Monster, stage a musical piece, “Putting on the Ritz” in front of a dignified audience. Curiously, not a Brooks stunt, but Wilder’s idea. Luckily though, the movie quickly returns to form from this intermezzo.

I had a great time watching “Young Frankenstein”. It is funny and quotably. Silly and witty but with a heart and a respect for the original story that make you feel like you watched a complete and coherent movie and not just a string of theme jokes. Warmly recommended.

As a bonus, see if you can spot Gene Hackman.