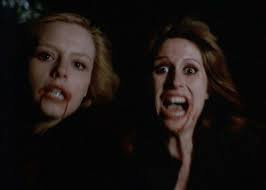 Sex and blood is a combo that always seems to work. Or the idea is that it is meant to work. An appeal to something primeval or something like that. Teenage vampire movies are the natural consequence and Heaven knows we are swarmed with those. The ultimate milking (pun intended) of this combo however must be the movie “Vampires”.

When I was browsing for off-List movies for 1974 I found a movie with the description “Vampyres is a 1974 British erotic/lesbian vampire horror film”.  Okay… I have to see this. This would either be fantastic or a complete disaster, both of which qualifies it for my list.

It actually turned out to be… neither… or a bit of everything. Certainly, it is not your average movie.

It is a story that barely adds up. Fran (Marianne Morris) and Miriam (Anulka Dziubinska) is a lesbian couple who was shot to death and now, as vampires, pick up strangers by the wayside, posing as hitchhikers, and take them to their gothic mansion where they seduce their victims, get them drunk and drink their blood. The corpses are placed back in their cars posing as mock car accidents. And yeah, there are a few holes in that premise…

Here is the thing: Fran and Miriam are very pretty, and the “seducing” part is… very explicit and so is the killing afterwards. There was some tongue kissing there that literally look like they are already eating each other, and it blends directly into a blood frenzy that looks more like cannibalism than the sanitized blood letting in a teenage vampire movie. This is Sex and Blood at full throttle.

Beside the girls and their random victims there is Ted (Murray Brown), a “victim”, easily seduced by Fran, who the girls for some reason do not kill. Just tap a bit of blood each night. Maybe Fran likes the sex too much. In any case, when Ted is starting to realize something sinister is going on, he is strangely unable to leave. Don’t ask why.

Also, there are the campists, John (Brian Deacon) and Harriet (Sally Faulkner), who have setup their caravan next to the manor and see a lot of strange shit.

On the one hand the production value here is actually reasonably high. There is some decent acting, and the set is spot on. Then on the other hand, this is a story with gaping holes and only there to set up the sex and the gore. So, I guess it is a movie that actually delivers what it sets out to do. It is not outright porn and it is not an amateurish production, but the scary elements often bent to camp and exploitation, so I am not entirely certain it counts as horror either. What it is, is a movie that dares to go all in instead of beating around the bush. It is unapologetic about what it does and despite its trash agenda there is something liberating in that.

You want sex and blood? You got it.