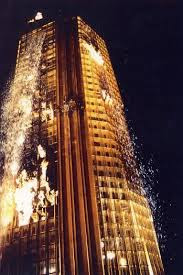 The last movie of 1974 is “The Towering Inferno”, an added movie from the 10th edition revision of the Book.

This is one of the most iconic of the seventies disaster movies, the one most people would have seen. It was frequently enough on television in my childhood but was, rightly so, deemed unsuitable for children to watch.

On the opening night of the tallest skyscraper in the world a fire breaks out due to faulty electrical wiring and hundred of people are trapped in the building, including 300 guests at the opening party on the top floor. In classic disaster movie style, we follow a variety of characters through a night that is growing increasingly desperate as the fire spreads.

Paul Newman is the chief architect of the tower, Doug Robert, who, too late, discovers that his specs has not been followed in a bid to reduce costs. Rather than attend the party, he goes on a hunt to survey the scale of the problem. Too late as it turns out, the bad wiring has already started a fire on the 81’st floor. The fire brigade, headed by Michael O’Halloran (Steve McQueen) are called in but as bad wiring is just one of many unsafe shortcuts, the fire spreads fast and is soon out of control.

A stellar ensemble cast includes William Holden as James Duncan, builder of the tower, Faye Dunaway as his daughter, Susan. Richard Chamberlain as her scumbag husband Roger, Robert Vaughn as a senator, O.J. Simpson as Harry Jernigan, security and not least Fred Astaire as an elderly con-man, just to mention a few.

This is a big movie in every sense of the word. Irwin Allen really went out of his way to create a spectacle. A skyscraper on fire is no simple affair and though some of the cinematography looks a bit dated, there is no doubt this is a landmark movie on pyrotechnics, special effects and stunts. The scale of the thing makes Allen’s previous movie, “The Poseidon Adventure” small and primitive by comparison. Usually on large scale disaster movies the acting drama takes the back seat and suffers as a result, but for a change this is not too shabby. Not surprising, really, when you have both Newman and McQueen in the movie. That cannot go wrong.

I was worried going in how this movie would work post-9/11. We have all seen the pictures of the twin towers on fire and people trapped on the top floors desperately trying to escape, recently even, as media was full of it less than 2 months ago at the marking of 20 years since the event. There are a lot of parallels and I kept making comparisons. The problem is that no matter how brutal Allen is, killing people left and right, it pales compared to the horror of 9/11. Reality trumps fiction. I suppose it takes something away from the movie and leaves a bit of poor taste in the mouth. McQueen’s last words that some day thousands of people will be stuck in such a building turned uncanny prophetic.

There is a parallel as well to human hubris, a combo of the Tower of Babel and the Icaros myth. Humans reaching for the sky, but being only humans with human failings, they get, literally, burnt.

I liked the movie a lot better than I had expected. It works on many levels, and I think that the lack of CGI and other modern tricks forces an emphasis on other element. Not for lack of trying, there is a lot of fire here, but there is also dramatic content.