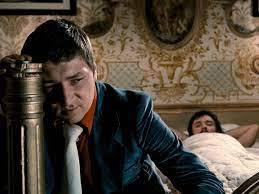 Rainer Werner Fassbinder is back with another hard-hitting drama, and he is not the kind of guy who holds back. “Faustrecht der Freiheit” (“Fox and his Friends”) is as tough to watch as these things get.

Franz Bieberkopf (Fassbinder himself) is a young man working in a carnival sideshow as “Fox, the talking head”. When the head of the show gets arrested, Franz finds himself without job and boyfriend. He has two passions he indulges in: picking up guys and playing the lottery and now he has time for both. At a public toilet he meets the wealthy art dealer, Max (Karlheinz Böhm) who brings him along with him as a plaything.

Jump ahead a month and Franz actually won the lottery and is in possession of the staggering sum of 500.000 mark. Because of this newfound wealth, Franz is now interesting to the sophisticated friends of Franz. One of them, Eugen (Peter Chatel), leaves his current boy friend and seduces Franz. Eugen is upper class with expensive habits, but the family fortune is all about lost and their company desperately needs money. This is where Franz fits in. Eugen needs those money, for himself and… well, for himself. He despises the working class Franz, but is willing to eat it if is helps maintain his lifestyle. Franz is just starstruck and completely blind and naïve to the way he is being milked dry.

Eventually, Eugen has managed to channel all Franz’ prize money into the family company, a swanky apartment and expensive art and furniture. When he dumps him, he simply changes the lock, and the old boyfriend moves back in.

It is interesting that “Faustrecht der Freiheit” is back-to-back with “Barry Lyndon”. Both movies are about a fortune hunter suddenly coming into wealth, thinking this is happiness, but then, unable to cope with it, loses it all again. Neither are particularly sympathetic, and both are blind to their own limitations, but that is more or less where the similarity ends. “Faustrecht der Freiheit” is an attack on a predatory upper class who use their status and a system rigged in their favor to exploit the working class. They need the working class to build their wealth but despise them all the same. All embodied in the arrogant and lecherous Eugen. More than anything Fassbinder delivers a political movie.

That they are all gay, is merely a distraction. Fassbinder probably found himself comfortable with a homosexual setting, but it has no impact on the actual story. Make them straight and it would be exactly the same story. My only problem with the gay angle is that the movie seems to carry on all the less flattering prejudices about gay men.

In the telling of the story, Fassbinder gives us no breaks. There is very little levity along the way, it is just a sad story that keeps getting more painful at every step. First because Frantz is completely blind to how he is being conned. He wants so badly to fit into the upper class. Then, as it dawns on him that he is losing himself, his money and that all the respect and attention he got was fake, he is powerless to do anything about it. Even the respect of his old friends he has lost. He is nothing and simply ceases.

It was not fun watching this movie. I understand where it is going and why, but it is not a movie I enjoyed watching. I did not particularly like Franz to begin with, but nobody deserves to be screwed over like this. It is just really sad.

Fassbinder fans will likely find a lot to love here. It is also the most outspoken LGBT movie so far on the List for fans of the genre. For me, this was a lesser movie than his previous movies on the List.