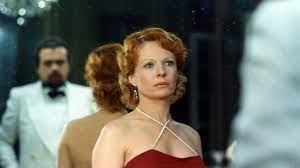 The best way to introduce the movie “India Song”, I suppose, is to try to describe it.

From start to finish there is a narration. This is mostly a dialogue, but with several different voices. Always the tone is as if the voices are reading poetry, slow, deliberate and obscure. In small bites the narration is well understood, but it also evades focus, so you soon loose track of what the dialogue is about. Or at least I did. There are thematic jumps, abrupt sentences, unanswered questions and sentences that seem to require a background story that is not shared with us. Most of all, there is little connection, if any, to the pictures we are watching.

Certain words are repeated. Something about vice-consuls, embassies, Lahore, Calcutta, lepers, tennis courts. All things that lead me to believe this is all about some members of the diplomatic corps in South Asia in the 1930’ies.

The pictures contain slow, often static people who never open their mouths. There is a woman (Delphine Seyrig, who seems to have made a career out of doing obscure movies) who is sometimes do slow dances with different men. Mostly though, these men are just standing or walking slowly around. The setting is a French mansion, and I am guessing we are to believe it is located in India.

Often the dialogue is combined or broken by music, including a recurrent theme that seems to be referred to as India Song.

This is about as pretentious as it gets. Very arty and stylized. So pretentious that it is almost a joke on itself. When somebody started shouting, I had to laugh, it was just so too much. Still, most of the time it is just plain boring because the narration keeps eluding me and I have no idea what is going on.

There is a trance like quality to the images and the voices that certainly makes it a special movie to watch and that does invoke a sense of dreaming and of something lost in the past as if the pictures are merely memories. It is an undeniable quality, but two hours of this is a long time to drive a point.

I did like the score though. It matches the trance-like images very well, especially that recurrent theme and there were periods where I was just listening to that and not worrying too much about the imagery or the narration.

Apparently, this movie is par for the course for director and writer Maguerite Duras and it certainly inherits something from the French art scene of the early sixties. I guess if you dig “Last Year in Marienbad” you will get a kick out of “India Song”.

Seeing “India Song” as a movie is probably wrong. It is an art installation like Jeanne Dielmann, but less successful, I think. It gets a little too impressed with its own artiness and so verges on being a mockery.

Still, not a movie I will soon forget, for better or worse.