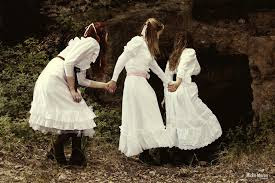 Peter Weir is one of the great directors and “Picnic at Hanging Rock” was not his first movie, but his breakthrough movie, in Australia, as well as internationally and deservedly so.

“Picnic at Hanging Rock” is a very special movie. Based on a novel, it is a mystery without a solution, a “true story” that may be fiction and a movie with a lot of more or less hidden themes. It also reminded me quite a bit of an Aussie-Victorian (in both senses) version of Twin Peaks.

In the year of 1900 in the area of Mount Macedon, Victoria, there was a private school for girls, called the Appleyard College. It was run by headmistress Mrs. Appleyard (Rachel Robert), a transplant from England who is now teaching daughters of wealthy Australians how to be refined, Victorian ladies. On an outing to nearby Hanging Rock, a volcanic outcrop, four girls venture up onto the rock and only one returns. The circumstances are mysterious (all clocks stop at 12 noon and people fall asleep only to act weirdly when they wake up) and the entire community is in an uproar about this strange disappearance, suspecting foul play.

On of these is Michael (Dominic Guard), a (very) young Englishman, who was out there at Hanging Rock and was the last to see them. Especially one of them, a beauty called Miranda (Anne-Louise Lambert), caught his attention and now he cannot let got. He ventures back to the Rock, has his own mystery experience and together with his friend, the coachman Albert (John Jarratt) he does find one of the girls, Irma (Karen Robson).

The apparent story is the mystery of the girl’s disappearance, but the real story may be something else. It may well be about escaping childhood, or more literally, escaping the Victorian constraints into freedom, an otherworldly freedom, from which only Irma decides to return. It is also about Mrs. Applegate desperately trying to keep the situation under control, asserting her dominance and failing.  I am certain many more themes have been found as this movie is very open to interpretation.

It is an amazingly beautiful movie. Especially the light and the general cinematography is stunning. Hanging Rock has become a very mysterious and forbidding place and the acting all round is surprisingly good, considering most of the young actors were amateurs. Add to this a soundtrack that fits exactly to the moods the movie is trying to create, including an evocative panpipe score by Gheorghe Zamfir (who since became synonymous with that instrument).

In 2005 I was on Mount Macedon, staying there overnight, but missed the chance of visiting Hanging Rock, although it is practically next door. A terrible miss, really. Still, this is a very pleasant area, and those outcrops are a bit freaky.

I understand that many people have a problem with this being an unresolved mystery and if you are of the type that insists on having the pieces tied together, this would be a frustrating thing to watch. Apparently, this was a real issue when the movie was released in the States. I actually found that the mystery is merely a cover for all the other things going on and also a very effective metaphor for what is happening to these young people. Without spoiling too much I did find the ending more shocking and surprising than the disappearances on the Rock and that ending took me a while to process.

In any case, even if you object to unresolved mysteries, the sheer beauty of this movie makes it worth the watch.